The UK’s first ultra-fast electric vehicle chargers are to go live within months, capable of adding 100 miles of range per ten minutes plugged in and joining what will be a pan-European network. 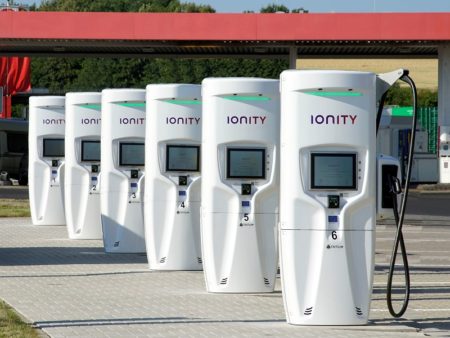 The first Ionity/Tritium chargers are now live in Germany

It marks the first steps in establishing the Ionity network, a carmaker-backed infrastructure project which will put 400 ultra-fast charging stations along Europe’s major routes. Once complete, the network will offer quick-stop refills for the large-capacity batteries in forthcoming long-range electric vehicles, at intervals of no more than 75 miles.

The UK’s first units will be supplied by Australian manufacturer Tritium, with chargers at unspecified locations in Maidstone, Milton Keynes and Thurrock, with locations set to be revealed during the autumn. A spokesperson for Ionity said the country would get at least 20 stations on the network, with pricing for users set to be announced within weeks.

Tritium’s first Ionity network chargers went live earlier this week at the Tank and Rast service areas either side of the A61 autobahn south of Bonn, Germany – each site offering six units. The company opened a European sales, testing and assembly facility in Amsterdam earlier this year to support its ongoing expansion plans in the region.

Dr. David Finn, CEO and founder of Tritium, said: “Increasing battery size and energy density means electric vehicles can travel further distances. But charging these larger batteries fast requires high-power charging infrastructure. Our HPC solutions deliver up to 475kW of power, making them capable of charging EVs in a very short time. And our goal is to bring charging times down even further, ideally to the same time as it would take to fill your tank with petrol.”

The manufacturer will supply around a quarter of the Ionity network’s chargers, in the UK, France, Germany, Norway and Sweden, while ABB will also have units on the network, and its first live in Lausanne, Switzerland. All will feature the Combined Charging System (CCS) DC connector.