Not enough is being done to tackle road deaths, is the key message being sent out by industry bodies, as government statistics show that 2018 observed no clear improvement. 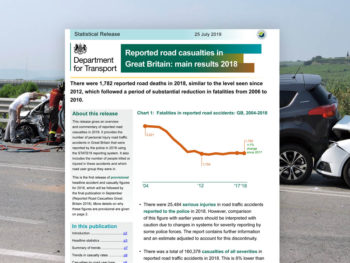 There were 1,782 reported road deaths in 2018; a similar number seen each year since 2012, which followed a period of substantial reduction in fatalities of around a third between 2006 to 2010, the government said in its Reported road casualties in Great Britain, main results: 2018 report. The figures should be taken as representative due to road accidents not all personal-injury accidents needing to be reported to police, unless as outlined in the Road Traffic Act.

However, offering a silver lining and due to a change in the reporting methods for casualties, the government added that there was a total of 160,378 casualties of all severities in reported road traffic accidents in 2018, which is 6% lower than in 2017 and the lowest level on record. In addition, the rate of fatalities per billion vehicle miles has fallen by 1% from 5.43 in 2017 to 5.38 in 2018, accounting for change in traffic.

The government says the road deaths have not decreased significantly since 2010 because most of the year-on-year changes are either explained by one-off causes (for instance, the snow in 2010) or natural variation.

RAC head of roads policy Nicholas Lyes said: “These latest road safety statistics make for stark reading. In short, precious little progress has been made in reducing the number of fatalities on our roads for nearly a decade.

“While it’s difficult to know if the removal of road casualty reduction targets and spending cuts in road safety advertising which occurred around this time have played a role here or not, we must now look to the future and hope the Government’s latest road safety proposals go some way towards improving things. It should now be a priority for the new Transport Secretary to get these figures back on the right track and prevent more lives being needlessly lost on our roads.”

Any commitment to dedicated targets – as exists across Europe, including in other UK constituent countries – was omitted from the DfT’s latest Road Safety Statement released last week, although it did commit to researching their effectiveness.

RoSPA’s head of road safety Nick Lloyd said: “We believe the case has already been made for the introduction of road safety targets in England. They are already being used to great effect in countries including Norway, which has the safest roads of any country in Europe, Ireland, which has seen dramatic decreases in fatalities over recent years, New Zealand, and even Scotland, where they have already seen a 50% decrease in fatalities against a target of 40%.

“We welcome the targeted interventions outlined in the Road Safety Statement, and hope that these have a real impact, however we also feel that targets would be of great benefit, as they help to focus and unite efforts to make our roads safer.”

In spite of some encouraging trends, IAM RoadSmart, the UK’s biggest independent road safety charity, maintains that a succession of governments have chosen to brush the issue under the carpet.

Neil Greig, IAM RoadSmart director of policy and research, said: “These figures underline the critical need to accelerate delivery of policies such a Graduated Driving Licences. The government road safety statement issued last Friday highlights many of the issues but was very short on actions.”

Young drivers aged 17-24 account for 7% of the UK’s driving licence holders, but are involved in 20% of fatal and serious collisions. Consequently, the Transport Select Committee is launching an inquiry to scrutinise what action the Government is taking to reduce the risks of young and novice drivers being involved in a road traffic collision.

Launching the inquiry, Lilian Greenwood MP, chair of the Transport Committee said: “Young and novice drivers are three times more likely to be involved in a road traffic collision than more experienced drivers. We want to explore why young and novice drivers are at a higher risk of being involved in a road traffic collision and determine what the Government can do to reduce these risks. The Committee wants to come up with solutions that will increase safety without unreasonably restricting young drivers.”

The Committee will be looking into whether there should be a probationary period following new drivers acquiring their driving licence that could impose restrictions including not being able to carry passengers, drive at certain times or be required to use a tracking device.

Charlie Norman, director at Drivetech, part of the AA, said: “We hope Grant Shapps, the newly appointed Transport Secretary, can also make sure this issue is clearly identified on his agenda for change. We continue to make our contribution by training business drivers to be better and safer, and supporting the police across the country with the delivery of driver offender retraining courses.”