UK car output at lowest level in almost a decade

British car manufacturing fell for a third consecutive year in 2019, hitting its lowest level since 2010 and showing the importance of trade deals within Europe. 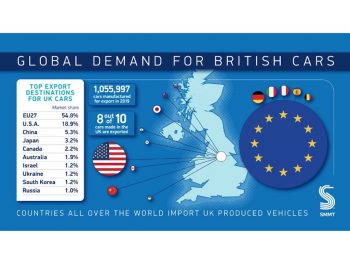 2019 saw British car manufacturing fall for the third consecutive year; down 14.2% to 1.3m units and marking its lowest level since 2010

New figures from the Society of Motor Manufacturers and Traders (SMMT) show output fell 14.2% last year to 1.3 million units, with a 6.4% drop in December alone.

Output was affected by multiple factors, including weakened consumer and business confidence at home, slower demand in key overseas markets, a number of significant model production changes and a shift from diesel across Europe. Factory shutdowns in the spring and autumn, timed to mitigate expected disruption arising from the anticipated departure of the UK from the EU on 29 March and 31 October, also had a marked effect, the SMMT added.

However, overseas orders continued to drive volumes, accounting for 81% of cars.

And the vast majority of these went to Europe, providing further evidence of the need for a UK–EU free trade deal.

Production is also expected to fall further in 2020 according to the latest independent production outlook from AutoAnalysis. The firm has downgraded expectations for this year’s UK car production total to 1.27 million units, down from the 1.32 million forecast made in November.

Responding to the 2019 figures, Mike Hawes, SMMT chief executive, said: “The fall of UK car manufacturing to its lowest level in almost a decade is of grave concern. Every country in the world wants a successful automotive sector as it is a driver of trade, productivity and jobs. Given the uncertainty the sector has experienced, it is essential we re-establish our global competitiveness and that starts with an ambitious free trade agreement with Europe, one that guarantees all automotive products can be bought and sold without tariffs or additional burdens. This will boost manufacturing, avoid costly price rises and maintain choice for UK consumers. Negotiations will be challenging but all sides stand to gain and this sector is up for it.”

Peter Barnes, partner and head of automotive sector at DWF, also commented on the figures, saying that they show that “the importance of trade deals with our European neighbours (presently representing 54.8% of exports for cars) remains as important as ever”.

He added: “Deals with other nations such as the US provide an opportunity for future expansion, provided the Government can reach favourable terms with the Trump administration. It remains to be seen if the freedom to trade to a wider market will demonstrate growth in demand and exports in 2020. However, what we do know is that the demand for electric and alternative-powered fuels will undoubtedly have an impact. Such technologies will continue to attract the public’s attention and their purchasing power – provided there is a political will to give support to British manufacturing.”