Trial project to cut transport emissions at University of Warwick

A new two-year trial exploring ways to reduce transport emissions is now underway at the University of Warwick. 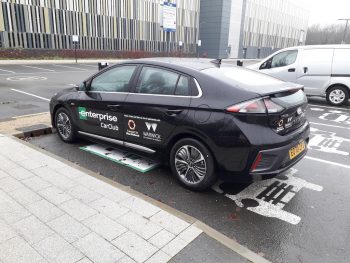 Intended to create a safer, more environmentally friendly campus, The Future Transport Showcase project will look at how the use of new transport solutions such as e-scooters, a car club and a demand-responsive bus service can affect travel behaviour.

Transport for West Midlands (TfWM), part of the West Midlands Combined Authority (WMCA), has teamed up with the University of Warwick on the trial, which will offer incentives as part of the ‘Choose your way Warwick’ campaign hosted on the Betterpoints App.

The projects include access to two hybrid Hyundai Ioniq cars via the Enterprise car club scheme. As well as the two Hyundai hybrids, members can also use any of the car club’s 1,400 vehicles around the UK and access the wide range of vehicles from Enterprise’s daily rental fleet.

Users can also make use of e-scooters from Voi Technology, being run as part of a pilot research project to help inform future government e-scooter legislation in the UK and research into micro-mobility. The e-scooter trial will begin on campus and roll out to cover a wider area.

Later in the year, a demand-responsive bus service will launch to encourage the use of public transport by offering the ability to order a bus in a similar way to a taxi.

The new project furthers existing work on mobility in the region; the West Midlands is already home to the £22m Future Transport Zone, set up two years ago and backed by government funding.

Mayor of the West Midlands Andy Street said: “From the outset of the industrial revolution, the West Midlands has always been a hub of innovation and we are still leading the way with the development of green battery technology, new low-carbon housing, 5G digital connectivity, autonomous vehicles and the transport systems of the future.

“The Future Transport Showcase at the University of Warwick will offer students and staff more flexibility, choice, and greener travel solutions for the region, at a time when we are facing a climate emergency and urging people to leave the car at home.

“And this trial will show what works as we develop transport policies to address the climate emergency we all face.”