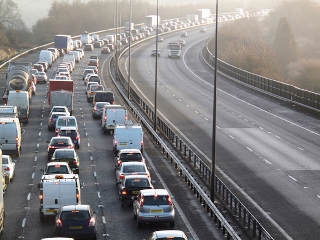 The fifth annual Traffic Index from TomTom shows average journeys in 2014 took 29% longer than they would in free-flowing traffic – up from a 27% delay in 2013.

They have also failed to improve in Sheffield and Leeds-Bradford.

The TomTom Traffic Index shows that Belfast is the most congested city in the UK, with journey times 39% slower than free-flow traffic throughout the day – peaking at 82% longer in both the morning and evening rush hours.

Second is London with journey times 37% slower, rising to 67% in the evening peak.  The Scottish capital Edinburgh is the third most congested city, with travel taking 36% longer on average and 71% longer in the evening rush hour.

Brighton and Hove (34% congestion in 2014 compared to 31% in 2013) moves up from fifth place last year to fourth, whilst Manchester also moves up a place to fifth with congestion increasing from 26% to 32%.

Dropping two places to sixth is Bristol, with congestion down from 32% to 29%.

“We can also give drivers the real-time traffic information and smart routing they need to avoid clogged roads and get there faster.  Our mission is to help reduce traffic congestion for everyone.”