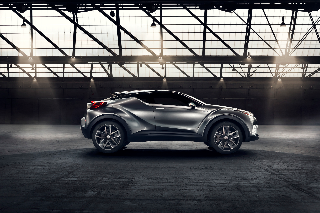 Previewed by the C-HR concept car last year (pictured), Toyota says this will be a coupe-SUV crossover, smaller than the RAV4 and designed to be fun to drive rather than focusing on practicality as in its larger sibling.

The as-yet-unnamed crossover is expected to be a key user-chooser car, and will be available with a hybrid drivetrain likely to emit less than 100g/km CO2. Toyota says sales in the UK are expected to be similarly weighted towards the hybrid as they are in the Auris range, which is 56.8% hybrids in the UK.

Sales will begin in the summer, a similar launch date to Kia’s forthcoming hybrid-powered small crossover, the Niro. However, unlike Kia, Toyota will offer conventional petrol and diesel engines in its newcomer.

Geneva will also mark the European debut of the new Hilux pickup, now equipped with a more efficient 2.4-litre diesel engine, as well as the Proace Verso, a nine-seat MPV based on the Proace van.