Haskel Hydrogen Systems has added a Toyota Mirai saloon to its fleet in line with its work to build a global refuelling infrastructure for hydrogen fuel cell vehicles. 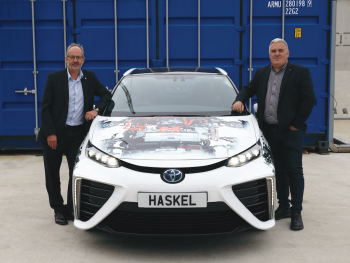 Haskel’s Toyota Mirai hydrogen fuel cell electric vehicle (FCEV) has been acquired with support from the Office for Low Emission Vehicles (OLEV) and will help Haskel reduce its environmental footprint, while raising the visibility of FCEVs,

Darran Heath, Haskel’s global general manager, Hydrogen Systems, said: “We’re really excited about having the Mirai on our fleet. We’ll be using the car to support the demonstration and development of our hydrogen refuelling systems, as well as provide emission-free business travel for the company.”

Work also continues elsewhere to support the development of hydrogen in the UK – which alongside battery electric vehicles could help the Government meet phase-out targets for petrol and diesel cars. Earlier this year, the new Hydrogen Taskforce called for collaboration on the refuelling network, urging industry and government to come together on a number of actions over the current parliament to enable hydrogen to scale and be deployed on a commercial basis moving forward.

BMW has also given the first insights into the powertrain system for the i Hydrogen Next concept, which provides a toe in the water for the carmaker ahead of plans to introduce a production car powered by hydrogen fuel cell technology in the second half of the decade.