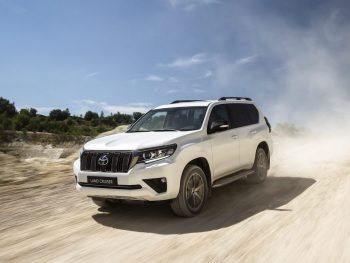 On sale now, the new 2.8-litre four-cylinder turbodiesel replaces the previous 2.8-litre and brings 204hp and peak torque of 500Nm, up 27bhp and 50Nm respectively. This delivers a 2.8-second reduction in the 0-62mph time to less than 10 seconds.

Despite the extra power, CO2 emissions remain broadly the same, ranging from 239-267g/km (WLTP) for the Land Cruiser, while the introduction of stop-start means fuel consumption is slightly improved; WLTP combined ranges from 27.7-31.0mpg, compared to 27.4-31.7mpg before.

Married up to a six-speed auto – with the Commercial also offering the choice of a six-speed manual – the new engine is also RDE2-compliant, so qualifies for a lower Vehicle Excise Duty charge, down by £325 in the first year compared to the current Land Cruiser and is exempt from the 4% diesel surcharge on company car tax.

The Land Cruiser Commercial, which is priced from £35,925 (excl VAT), retains its existing line-up of short- and long-wheelbase versions (three and five-door) in Utility and Active trims. They both adopt the new engine and the Active grade gains Apple CarPlay and Android Auto.

The updated Land Cruiser passenger car line-up also now offers two equipment grades. This includes an entry-level Active grade available in three- and five-door formats and with five or seven seats. Priced from £42,345 for the three-door, this brings standard spec including Apple CarPlay and Android Auto as standard, together with an improved multimedia system, which gets an eight-inch touchscreen and brings a faster software and command response. Other Active features include 17-inch alloy wheels, cruise control air conditioning, smart entry and push-button start, roof rails and heated power door mirrors.

The Invincible is also available with an optional Black Pack, which can also be specified with an all-black exterior finish. The look is carried through to the cabin with black finish for the centre console and transmission tunnel. Black alloy wheels can also be specified as an additional option.

The Land Cruiser Invincible also benefits from updates and additions to the Toyota Safety Sense package. The Pre-Collision System gains the ability to detect pedestrians and, in daylight driving, cyclists. The intelligent Adaptive Cruise Control improves safety while aiding motorway motoring for the driver, and Lane Trace Assist has been added.

First deliveries of the passenger models start from October, followed by the Commercial versions later in the autumn. All new vehicles come with Toyota’s five-year/100,000-mile warranty.