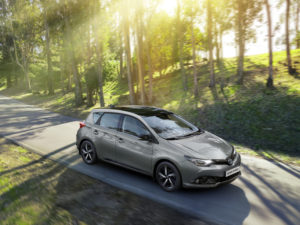 The 2018 Toyota Auris won’t have a diesel option

Toyota has discontinued diesel versions of the Auris as part of a 2018 refresh, in line with customer demand shifting in favour of the hybrid.

The hatch and estate will be offered with just two powertrains, 1.8-litre petrol-electric hybrid and a direct-injection 1.2T turbocharged petrol. The latter engine is available with either a six-speed manual or CVT.

The Hybrid has taken a progressively larger share of Auris volumes since it launched in 2010. During the first ten months of this year, 9,738 were registered in the UK, accounting for 73.2% of the model’s total volume, and demand has been steady at around 10,000 units per year since 2014. Petrol and diesel versions have declined from 9,511 to 3,568 (2017 year-to-date) during the same period.

One possible further reason for the Auris’ range being reduced, is the rise of B-SUVs that have witnessed growth in Europe from 60,000 in 2000 to 1.4m units in 2016 and Toyota’s own C-HR is a prime example, according to Jato Dynamics. Launched at the end of 2016, C-HR registrations, and the hybrid/non-hybrid mix, are almost identical to the Auris.

For 2018, the Auris’s ‘Active’ grade trim has also been discontinued, making ‘Icon’ the new entry-level, followed by ‘Icon Tech’, ‘Design’ and the top-of-the-range ‘Excel’. Additionally, there is a ‘Design Bitone’ trim with two-tone paint scheme.