‘Toxicity Charge’ to start in central London from October 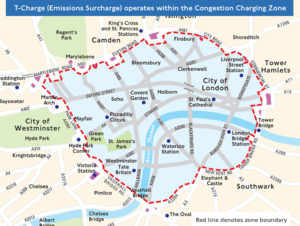 The T-Charge will operate within the Congestion Charging zone

Announced by the Mayor of London, Sadiq Khan, the T-Charge will apply to pre-Euro 4 vehicles – typically those diesel and petrol vehicles registered before 2006 – with up to 10,000 vehicles expected to be potentially liable for the new emissions levy every weekday.

Drivers can check whether their vehicle will be affected by the T-Charge using a free online vehicle checker on the Transport for London.

The T-charge (also known as the Emissions Surcharge) will run in addition to the Congestion Charge and use the same operating hours (Monday to Friday 7am-6pm), meaning that it will now cost £21.50 to drive a pre-Euro 4 vehicle in the zone.

Mr Khan said: “The T-Charge is a vital step in tackling the dirtiest diesels before I introduce the world’s first Ultra Low Emission Zone as early as 2019.

“I will continue to do everything in my power to help protect the health of Londoners and clean our filthy air. But now is the time for Government to show real leadership and join me by introducing a diesel scrappage fund and bring in the new Clean Air Act we desperately need.”

RAC roads policy spokesman Nick Lyes welcomed the introduction of the scheme but add concerns that its October introduction doesn’t give owners of vehicles affected by the charge much time to acquire newer ones.

He added: “What’s more, owners of these older vehicles are also those that are likely to be less well-off and therefore may struggle to purchase a cleaner vehicle in such a short period of time. It could also disproportionately impact on struggling smaller businesses.

“Given the short amount of time before the charge is brought in there really ought to be incentives to help owners trade in their older diesel vehicles.”