A new generation of economical four-wheel drive systems are finding a growing role outside the SUV sectors, including in fleet. Natalie Middleton looks at the market potential. 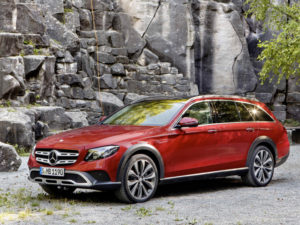 4MATIC four-wheel drive will be available on E-Class models including the All Terrain.

Once popular mainly in the snowiest and most mountainous regions of Europe, recent cold winters have heightened awareness of four-wheel drive outside the traditional SUV sectors in the UK. Audi has long been synonymous with Quattro, and BMW’s xDrive system is also becoming established. With 4MATIC joining the four-cylinder E-Class range this year, now Mercedes-Benz is entering the fray.

It’s a hint that there’s a growing market. Although Mercedes said it was too early to comment on proposed take-up of the technology, both BMW and Audi are reporting increased take-up for their respective systems. How big is the market, and what’s driving demand?

Audi has offered its Quattro permanent all-wheel drive since the Eighties, and is rolling out a new version across its model line-up. The latest Quattro drive system with Ultra technology monitors driver behaviour and road conditions, only activating four-wheel drive when needed. Audi claims enhanced efficiency, particularly in motorway use, with no perceptible difference from permanent systems in terms of traction and driving dynamics.

The technology launched last year in the new A4 Allroad and is being rolled out across models including the Q5, A5 and Q7 models; according to national fleet sales manager David Hanna, it’s helping to push take-up of Quattro models in the fleet sector.

He explained: “These models are generally chosen due to location or job role. This hasn’t changed, but the uptake is higher due to the wider availability of AWD on non-SUV models and the improved efficiency of AWD systems, meaning less impact on fuel consumption and Benefit-in-Kind liability for the driver. Fleet policies are also now more likely to add AWD options not only in recognition of the obvious safety benefits these systems offer but also in response to driver demand.”

But Audi said its permanent Quattro technology is also seeing increased fleet take-up, in particular through its application on smaller engines, such as the 119g/km A3 1.6 TDI Quattro available since last year.

“Audi’s Quattro mix is 32% in 2016 and we see this growing further in 2017,” said Hanna. “The SUV segments are experiencing strong growth at the moment, and fortunately the rise of AWD on non-SUVs is happening alongside this growth and not to the detriment of SUV sales.”

BMW has offered four-wheel drive since the 1980s, but with limited UK availability. Its Quatro rival is xDrive, and widespread availability is driving increase take-up across fleet and business sales, according to David Tuckett, national corporate sales manager.

“By the end of 2016 we expect sales of approximately 13,000 units of XDrive products sold through the BMW fleet and business channels which equates to a growth of approximately 20%,” he said. “Following the introduction of xDrive on BMW 5 Series, launching in February 2017, this should only result in continued growth in this area.”

He added that take-up varies across the product range for corporate customers. BMW xDrive models account for 14% of the total sales of the 3 Series range, rising to 24% of BMW 4 series sales, possibly due to the higher purchasing potential that BMW 4 Series customers have.

The trend is widespread across all of the corporate sales channels, including SMEs and larger fleets: “Some models within the range such as BMW 420d Gran Coupe with XDrive are proving to be especially popular. Additional safety is the main reason for purchase as it provides peace of mind in inclement weather, particularly for drivers of more rural areas,” Tuckett added.