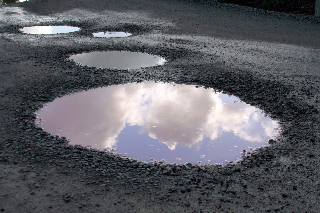 The firm’s database of 50,000 live policies found that Hyundai’s Santa Fe (06-12) and the Land Rover Discovery 3 (04-10) have the next most susceptible suspension, with 13.9 and 13.3% respectively of Warranty Direct customers claiming for axle & suspension damage annually.

At the opposite end of the scale, the Ford S-Max (06-15) and Nissan Qashqai (07-14) share top billing as the cars least likely to be affected by UK potholes.

Research revealed last month by the Annual Local Authority Road Maintenance (ALARM) survey estimates that getting the roads back to scratch would incur a one-off cost of £11.8bn and would take 14 years to clear the carriageway backlog.

In addition, recent Kwik Fit research has found that British motorists have had to fund repair bills totalling £684m as a result of damage caused by hitting potholes over the last year.

Warranty Direct found that the average repair bill for pothole damage now stands at £350, with the most vulnerable cars more than 15 times worse than the most robust models.

It added that potholes are typically at their most prevalent on Britain’s underinvested road network between January and April, as heavy rainfall undermines the lower structural layers of roads, creating cracks then more potholes, increasing the likelihood of suspension damage.

Warranty Direct managing director David Gerrans said: “The variation you see in suspension damage from one model to another is remarkable.

“Potholes are a major factor in causing axle & suspension failure and any vehicle regularly driven over impaired road surfaces or used for commuting over pothole-strewn routes will ultimately incur damage eventually.”