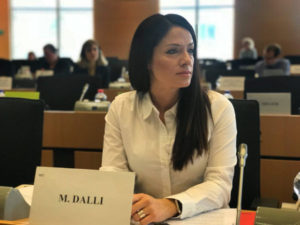 Speaking to the Committee on Environment, Public Health and Food Safety in the EU Parliament this week, Dalli – a Maltese politician from the Labour Party – proposed the EU set a more ambitious 2025 interim target of 25% CO2 reduction and a 50% CO2 reduction by 2030, as she said that without a new mandatory 2025 target, no carmaker will have the required incentive to move away from the 95g/km target that has to be achieved by 2021.

“There will be very little appetite for automotive industry to increase their market share of zero- and low-emission vehicles earlier on in the decade,” said Dalli, adding: “A 2025 interim target provides clarity and is a clear strong signal for car manufacturers to act.”

Dalli said that the new target would bring a number of benefits, including providing incentives to develop ULEVs that would ensure the European car industry would not fall behind, while also benefiting the economy from reducing the EU’s dependence on imported oil and petroleum products, and shift demand towards domestically produced energy and electricity.

She also called for green automotive battery cells to be manufactured within Europe, as she expressed her support for the EU battery alliance initiative launched last year by Maros Sefcovic, European Commission vice-president in charge of energy, to drive battery production in the EU.

Dalli also said that drivers would see benefits from reduced running costs but conceded that more investment would be required in charging infrastructure.

And Dalli looked at the issue with real-world emissions figures, highlighting that although the switch from NEDC to WLTP is likely to give more representative type approval CO2 emissions figures, it is not expected to completely close the gap with real-world CO2 emissions. Instead, she called for the European Commission to develop an RDE for CO2 emissions and until such time as the RDE test becomes applicable ask for compliance checks, by using data from fuel consumption meters and have a fixed not-to-exceed limit.

Commenting on the proposals, Julia Poliscanova, clean vehicles and air quality manager at environmental NGO T&E, said: “We welcome MEP Miriam Dalli’s targets. Independent research (ICCT, TNO, etc) has shown that to be in line with the Paris Agreement, the CO2 targets for new cars and vans have to be nearer 60% reduction in 2030, with half that delivered in 2025. So MEP Dalli improved the inadequate Commission proposal and put cars and vans back on track to do their share for the climate.”
For more of the latest industry news, click here.