A three-year trial of vehicle-to-grid charging has demonstrated that domestic users could offset most of their annual energy bills by using the technology. 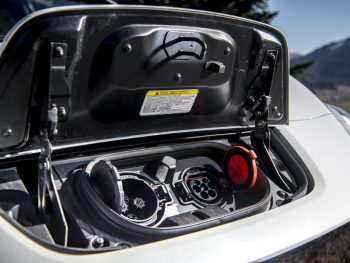 V2G is seen as an important component of widespread electric vehicle adoption.

Claimed to be the world’s largest domestic V2G trial, Project Sciurus was led by OVO Energy and funded by the Office for Zero Emission Vehicles (OZEV) and Department for Business, Energy and Industrial Strategy, with Nissan, Kaluza and Indra as partners.

The project equipped 320 homes with V2G chargers, which enable energy stored in the vehicle’s battery to be sold back to the grid during periods of peak demand. This could either be during pre-approved times, or a dynamic service which responds to spikes in usage.

Data gathered during the 2020 calendar year highlighted significant savings for end-users. Just switching to a smart charging point (which can automatically manage the energy it draws) could save £120 compared to not optimising the charging routine. Drivers selling energy at set times could receive £513 in return, rising to £725 for those supporting Dynamic Containment. That’s in line with UK-wide average household energy bills of £707 in 2020, according to BEIS data.

In its concluding report, Cenex advised that additional funding should be provided for V2G chargers to encourage drivers to adopt them – these cost around £3,700 more than the smart chargers funded by government grants. At £1,000, the incremental cost versus an unmanaged charger could be recovered in five years just by optimising a charging tariff, and not selling energy back to the grid. National Grid ESO, which is responsible for the transmission network, expects 45% of UK cars will be using V2G chargers by 2050.

Users also said they felt it was important to have the capability on their next electric vehicle. At present, this is only supported by the CHAdeMO standard, which includes the required communication protocol for the charger to exchange battery data with the vehicle. The CCS standard, used by most new vehicles sold in Europe, does not support V2G yet, though this is under development.

The trial offset requirements for an additional 750MWh of energy generation during its three-year term, suggesting the technology could avoid expensive grid upgrades as a greater share of the UK vehicle parc switches to electric or plug-in hybrid powertrains.

Chris Russell, managing director OVO Drive, OVO Energy, said: “Over the past couple of years we’ve enabled our members to store energy in their cars, use that to power their homes and to sell energy back to the grid at peak times, ultimately allowing our members to earn rewards from smart charging their electric vehicle. We hope this trial acts as a blueprint for wider adoption to ensure we collectively unlock the huge environmental opportunity that electric vehicles offer.”