Three-quarters of drivers think EV sounds should be standardised

Drivers think electric vehicles should emit sounds like petrol or diesel cars to help protect vulnerable road users, while the majority think they should be standardised. 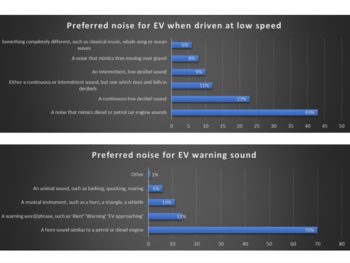 Organised by Brake, this year’s Road Safety Week is focused on the theme of ‘Step up for safe streets’ to celebrate design-led solutions that will allow everyone to get around in safe and healthy ways, every day.

As part of this, Venson surveyed 200 drivers in October 2019 – some three months after new legal requirements for all new hybrid and EVs to incorporate an acoustic vehicle alert system (AVAS) kicked in – and asked them how EV engine noises should be standardised.

The research found the majority (72%) of drivers think sounds should be standardised while nearly half (43%) said they would like to hear a noise that mimics diesel or petrol car engines; 23% would prefer a continuous low decibel sound. Thankfully, only 6% would choose something completely different, such as classical music, whale song or ocean waves.

Alison Bell, marketing director for Venson Automotive Solutions, said: “The integration of AVAS into hybrid and electric vehicles is a very positive move.  Almost silent electric and hybrid cars put vulnerable road users at risk, especially children, the partially sighted and blind.  As more fleet drivers opt for emission-free electric models, with the introduction of zero BIK tax from April 2020, they will be relieved to know that with the introduction of AVAS their choice will no longer put road users at risk.”

Meanwhile, with EU law from 2021 enabling EV drivers to manually trigger a warning sound, as in a horn but less urgent, to alert pedestrians and road users of their presence, the research also found 70% of respondents would like to hear a horn sound similar to that made by a petrol or diesel engine vehicle.  Just 13% wanted to hear a phrase such as ‘EV approaching’, however 6% would prefer an animal sound like a roar, bark or quack instead of a traditional vehicle horn.

Alison Bell added: “With over 100 years of petrol and diesel engine sounding vehicles on our roads, people naturally react to the sound of an approaching vehicle or a horn being sounded. Keeping sounds we are used to hearing on UK roads makes the most sense when it comes to road safety and saving lives.”