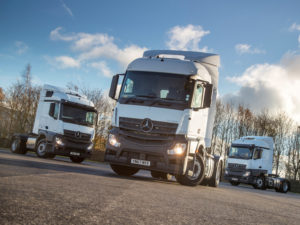 Since the first HGV was launched two years ago, more than 4,000 dangerous drivers have been stopped, including one driver filmed with his foot on the dashboard and checking his phone.

The new additions come as the existing HGV is retired, and will patrol England’s motorways and major A roads, using wide-angle cameras to capture unsafe driving behaviour. They also have a derestricted speed limiter which means they can travel at speeds up to the national speed limit. Drivers are then pulled over by police cars following behind.

In total, 28 police forces have taken part in the HGV cab safety initiative since it began in April 2015, pulling over 4,176 drivers in relation to 5,039 offences in its first two years. Nearly two-thirds of the drivers who were stopped were illegally using a mobile phone while driving.