New technology that can pick up if drivers are using a phone and activate a warning sign is imminently being launched on UK roads. 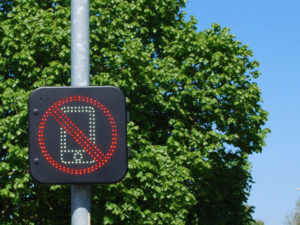 Developed by traffic safety systems firm Westcotec, the new system uses a sensor capable of detecting vehicles where there are active 2G, 3G and 4G phone signals with an LED warning sign a short distance along the road accordingly activated if drivers are using phones for calling, text or data purposes.

The technology is intended at this stage to warn drivers and provide an education programme, with Westcotec commenting: “We are not currently connecting the system with enforcement, but we plan to work towards that.”

The system is said to have been met with “considerable” early interest – the first unit goes live later this month in Norfolk, with several other UK police forces expressing an interest or requesting a demo.

The technology isn’t triggered by Bluetooth usage but can be set off by non-driving occupants – however the firm said: “The vast majority of activations will relate to drivers, and we don’t see a problem when passengers activate the sign. In fact, it’s all part of the education message that using a phone when driving is not only illegal but very dangerous.”