By Jonathan Musk / 3 years ago / Features, Top Stories / No Comments

The BVRLA’s fifth Fleet Technology Congress offered special insight into the key elements that will make up the future of fleet. Jonathan Musk reports… 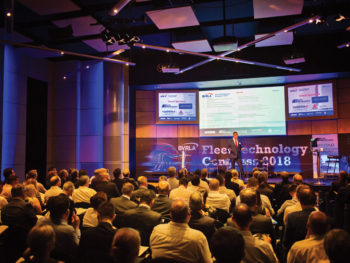 “There are three main areas we want government to really work with us on and look at resources in terms of delivering on this future mobility opportunity,” Gerry Keaney, chief executive of the BVRLA said at the 2018 Fleet Tech Congress, held at Williams F1. Those three subjects are: vehicle data, electric vehicles (EVs) and Mobility as a Service (MaaS).

The BVRLA has produced a 21-page guide on GDPR, which is considered concise, such is the complexity of the new laws.

And, despite Brexit and what that might mean for future UK law, Keaney stressed that GDPR is a Europe-wide concern, not just a UK isolated problem. “We recognise that there’s not going to be a UK solution on vehicle data and access to it or ownership of it, or the utilisation of it. Whatever the solution, it will be a European-wide solution. Key decisions are not made by UK national service companies,” he commented.

Besides possible setbacks caused by the governance of data like GDPR, automotive OEMs are pushing ahead regardless with connected vehicle technology. Nearly 40% of European automakers (OEMs) already offer an embedded connection within the vehicle and, “every fleet car by 2022, including fleet vans, will be connected”, said Keaney.

This has already been kick-started by the European Union’s eCall mandate which, since April 2018, has required that all new cars and light vans are fitted with an embedded SIM that enables an automatic emergency response call in the event of an accident. In addition, automakers have adopted a “freemium” model that sees them provide consumers with complimentary access to embedded connectivity. And today 62% of premium new car sales, or 13% of the total volume of new car sales, already have embedded connectivity.

In broad terms, the implications for connected vehicles go far beyond nationwide borders. What the technology can provide fleets is almost immeasurable, and it can be person agnostic too in its rawest format, alleviating some of the GDPR concerns about data sharing. Automakers can use vehicle data to help them hit important reliability or quality KPIs whilst also making the same data available for third parties to purchase so that they can enable their own set of use cases. In the case of rental and leasing companies, vehicle data can bring a wealth of operational and asset management benefits. Connectivity and vehicle data are already disrupting the traditional economics and R&D focus of the automotive industry, as well as many of the legal frameworks and business models that have served the fleet industry for so many years, the BVRLA said.

Data is also hugely important to fleets in terms of much more real-world day-to-day scenarios, as common as accidents. The problem is consistency, says Charles Smith, CEO Collision Management Systems. “Boxes are not made equal”, he commented, “the variance in the data that comes from them is a significant challenge.” The solution, he proposes is for a data management company to work between customer and telematics. The other problem is sensitivity. At one end of the spectrum, telematics data can be set to report no false alerts whereas at the other they’ll report too many. The issue comes whereby the zero-false alert claims come with the caveat that they may not pick up a crash at all. “Less than 10%, or in the HGV market that lowers to 1-2%,” Smith adds.

Fleets can play a major role in meeting government air pollution targets. However, short term failings including company car tax and VED are being seen by the BVRLA as disincentives to fleets buying electric cars. Additionally, in the longer term, as electrification grows, the tax yield based on emissions will inevitably decline for the government. “Discussions around taxing electric vehicles needs to be at the forefront of discussions,” added Keaney. “Whether it’s road charging or the energy used by vehicles, there needs to be a way for the exchequer to top up its coffers.”

A lack of charging infrastructure is often cited as a dissuasion against buying EVs. Therefore, the BVRLA believes government needs to address this, whether that’s a relaxing of planning regulations to enable simpler charge point installation, or the building of supplementary sub stations where power is inadequately supplied.

In order to avoid a chicken-egg situation, the BVRLA made an ambitious ‘Plug-in Pledge’ that will see its members’ combined plug-in vehicle fleet surge from 50,000 today to 750,000 by 2025. The government predicts some 2.5 million EV sales in the UK by 2020, added Jeff Knight, forecasting editor at Cap HPI, while Pod Point’s Chris Cheetham, head of business development, pointed out that 95% of the time a car spends its life parked, meaning charging while at home or work should be priorities that enable and encourage electric vehicle adoption.

Furthering the case in favour of EVs, KPMG’s UK head of automotive, Justin Benson, said 85% of journeys in the UK are fewer than 25 miles and that by 2030, predictions are that 25% of the market will be made up of EV and hybrid, with the remainder a mix of petrol and diesel.

The move to electric propulsion doesn’t only benefit cleaner air. EVs were also proposed as having the potential to increase the lifespan of vehicles, which has a positive effect on TCO. And, by 2022, Benson predicted price parity should be reached between electric and petrol cars.

Offering a modicum of objection was Matthias Wellers, MD for AVL Powertrain UK, who said that EVs and autonomous vehicles will take years to arrive, suggesting that mass adoption is more likely 20-30 years away. “It’s a marathon, not a race”, he said, and there are simply too many unsolved problems. However, he added that fuel cells show great promise, particularly with ongoing investment from Japan and interest from China – and it is more suited to light and heavy goods transport than battery technology can offer today.

Perhaps the most telling statistic was offered by Cheetham, who said that 46.5% of fleets said they’d look to electric or petrol/diesel hybrid for their next company car.

Mobility as a Service

“14% of UK consumer spending is on transport. It’s bigger than food, clothing and more – it’s the single largest sector,” said Paul Campion, CEO Transport Systems Catapult. And of course all that food and shirts have used transport to get to shops before we buy them in the first place.

Despite this fact, a word of caution is due when discussing MaaS as it can be a confusing all-encompassing term. Ashish Khanna, partner at L.E.K. Consulting, said: “On the one side we have the public sector view; that the consumer has a seamless journey and a mass transport link. And at the other end of the spectrum we have the automotive OEMs: subscription services, car share services, car rental companies.”

Although relatively new to the market, car sharing and other new transport business models are themselves at risk of disruption. Khanna continues, “As soon as robo cars appear, car sharing goes away.” Despite many manufacturers including Jaguar Land Rover recently launching Liquid car rental service and

Volkswagen announcing WE (its electric car sharing service due to start in Germany in 2019), there’s a real risk these business models won’t survive in the long term because it is difficult for companies to see a return on investment when technology is moving quicker than a typical five-ten year business plan. A key takeaway is that disruptive technology can itself be disrupted.

“Uber today, is worried about being disrupted by Waymo,” Khanna added, “and Waymo will crush Uber’s business model.”

The knock-on effect of these far-reaching disruptive models comes when government tries to plan infrastructure. If governments are tempted to adopt potentially flash-in-the-pan technologies, they risk pointless and short-lived expenditure.

Conversely, MaaS puts urban planning right at the centre of policy making and is an exciting area that fleets can participate in, says the BVRLA.

The question of how to get people to transition from vehicle ownership to MaaS, however, isn’t quite as clear. For one thing, consumers aren’t yet pushing for MaaS, but rather service companies are.

Challenges include changing the mind-set of the millions of car drivers and people being used to changing them regularly, or every three years for fleets. Scrappage schemes are often promoted as a means to rid our roads of the higher-polluting vehicles, but the BVRLA says this isn’t necessarily a wise approach. Instead, Gerry Keaney illustrates the idea of mobility credits – a means whereby people aren’t swapping a car with yet another car – particularly when that car is not yet likely to be electric – and instead credits could be used on any feature of the transport system, from rental cars to trains, taxis and buses.

Autonomous vehicles are often touted as one answer to the future too, and this would likely mean cars are built to last longer, not fewer years as is the current model and mind-set of consumers. KPMG’s Justin Benson says cars may be required to last two life-cycles, or around 15-years time. And beyond 30-40 years’ time, it’s even possible to envisage that it may even be illegal for humans to drive at all.