US firm The 300 Group has completed a 50% share acquisition of UK paintless dent removal (PDR) company TDN Group in a move that will bring its Axiom repair brand to the UK and see the roll-out of 25 new repair centres over the next five years. 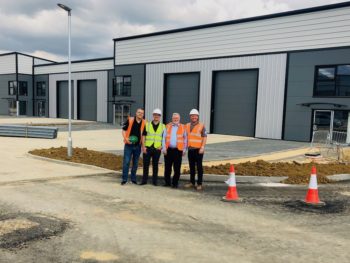 Axiom UK takes the keys to its new 18,000 square foot repair facility in Peterborough, which will be home to the first of 25 planned centres across the UK

Axiom UK will use the processes developed in the US by the Colorado-based company, said to enable it to offer the highest quality non-structural vehicle repairs in record times, with 85% of work taking less than three days, key-to-key.

It will also draw on TDN Group’s knowledge and investment in emerging vehicle technology repair.

The firm’s launch in the UK SMART repair market will see it open a brand-new 18,000 square foot facility in Peterborough in September, with another 24 sites planned around the UK in the next five years.

Jordan Fisher, managing director of TDN Group, added: “We have had a very close relationship with The 300 Group over the past eight years, since its COO Ryan Hampton founded PDR Nation, the non-profit organisation which gives technicians a support network of training and material, and I was heavily involved with him from its inception.

“I have been watching their success with the Axiom model over the past few years and we are very excited to be able to bring it to the UK together with them.”