Travellers on Transport for London’s networks are being warned to wear a face covering or face a fine of up to £6,400. 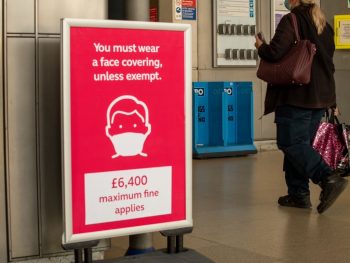 Travellers not wearing a face covering on TfL’s networks could face a fine of up to £6,400

The vast majority of travellers on TfL’s transport networks are correctly using face coverings – with up to 90% compliance at the busiest times of the day – but TfL warned that the small majority flouting the law could face prosecution.

And operations are now underway to ensure compliance. TfL’s enforcement officers, alongside police officers from the Met and British Transport Police, are carrying out enforcement operations on the transport network every day at locations across the capital.

Enforcement operations have already taken place on buses, trains and at stations across London, including Stratford, Notting Hill Gate, King’s Cross, Bexleyheath and Stamford Hill. The measures target people failing to wear their face covering properly as well as those without one.

Face coverings became compulsory on public transport on 15 June for those not exempt but it’s only been since 4 July that TfL enforcement officers have switched from education to enforcement on non-compliance. Since then, officers have carried out around 105,000 interventions. Most complied after being spoken to by an officer. Around 7,600 were stopped from boarding and 1,800 people removed from services. And around 400 fines have been issued by TfL officers to those refusing to comply.

Following new measures introduced by the Government, TfL and the police have powers to issue stronger penalties and to prosecute those more persistent offenders.

Siwan Hayward, director of compliance, policing operations and security at TfL, said: “To help protect everyone’s health and control the spread of the virus, it is essential that people wear face coverings. It is also hugely important for giving Londoners confidence to travel.

“We would rather people were sensible and follow the law, but we will take enforcement action when we need to.”