Transport for London (TfL) is reminding Londoners to drive safely as large numbers of people are walking and cycling, and significant temporary infrastructure changes are being made across London to protect them. 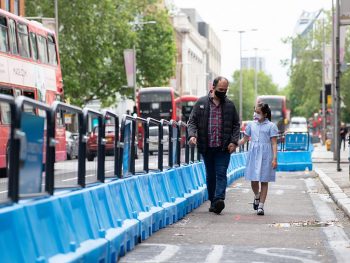 Drivers are reminded to watch out for changes, drive carefully and obey the speed limit at all times

The call to action by TfL follows an increase in speeding, resulting in a number of road fatalities and injuries. Since 20 March when the lockdown began, 16 people have died on London’s roads, despite an average reduction of 35% in traffic levels.

In addition, footways and bus platforms have now been extended across the capital, creating an additional 19,000m2 of space for people walking and cycling in the past month, but consequently less room for vehicles.

Speed limits have also been lowered, with the speed limit on Park Lane reduced from 40mph to 20mph to reduce road danger further, and TfL plans to introduce 20mph speed limits on more main roads across the capital as part of the Streetspace plans.

The latest statistics show that while eight fewer people have died during lockdown compared with the same period last year, the number of people riding motorcycles and cycling killed in road traffic collisions has risen. During this time, there have been ten motorcyclists killed on London’s roads, with two people walking and two cycling.

Police have recorded speeds of over 130mph during speed enforcement activity across the capital. Even a relatively small increase in speed, however, is known to raise risks to drivers and vulnerable road users such as people walking, cycling and riding motorcycles.

Superintendent Andy Cox, from the Met’s Roads and Traffic Policing Command, said: “We recognise the anticipated increase in walking and cycling across London and have intensified roads policing patrols on roads with 20 and 30mph limits. Speeding remains the biggest risk to road safety and it is our number one focus for traffic enforcement.

“I urge people to drive within the speed limit, stay safe and keep a clean licence.”