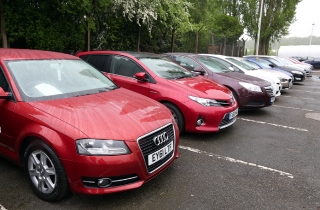 The next decade will bring huge advances in autonomous vehicles, from driver assistance systems to the first ‘driverless’ production models expected in 2025. In the meantime, agencies such as Thatcham Research and the Transport Research Laboratory are working to change legislation to make the technology road-legal, with aims to amend type approval and ISO standards by the end of 2018.

The BVRLA’s latest Fleet Technology Survey shows a growing appetite for partial autonomy – 60% of respondents said autonomous emergency braking (AEB) will be the most important safety technology for fleets in 2020, followed by dashcams at 47%. That compares to 44% and 30% respectively in 2015, but it’s largely driven by cost.

“Motor insurers and safety assessors have recognised the importance of AEB, as has the fleet industry,” said BVRLA chief executive, Gerry Keaney. “It is now time for the government to take a lead by mandating the use of AEB-equipped cars across its own fleet and promoting wider uptake through the use of tax and other incentives.”

Telematics has become a widely used tool for vans, but also recently for passenger cars, but Andy Price of Zurich Risk Engineering believes it’s up to operators to make the most of the technology. Financially it can usually be covered by fuel savings alone, but it’s important to engage with drivers and help them plan against long hours where possible, possibly using video conferencing.

“If you haven’t got good risk management policies and procedures then telematics is ineffective,” explained Price.

Andrew Brown-Allan, group marketing director of Trak Global and Carrot Insurance, said ‘gamification’ is a useful tool for driver engagement. The company monitors its young customers’ behaviour at the wheel, with points and financial rewards for safer driving. But, he added, it’s important to share data in a way that engages drivers, and to identify a suitable motivator, for it to work.

Consultancy firm SBD is predicting 20 million connected cars will have been registered globally by the end of the decade. This will be accelerated in Europe by mandating eCall from 2018, which will enable cars to share data to help emergency services respond quickly, but that on-board connectivity has challenges as well as opportunities.

The ability to access information remotely, and to activate features via a smartphone app, has the potential to make cars hackable. Terry Gibson of the Independent Garage Association said this could also give franchised dealers an advantage, being able to access diagnostic data which independents might not be able to use. The association is calling for a standardised platform for accessing it.

For businesses, data protection is a growing issue. Kirsten Whitfield, director at legal firm Wragge Lawrence Graham & Co, said it’s important for employers to recognise that data is personal and valuable – including for criminals. Forthcoming EU legislation, due in 2017, will introduce large fines for businesses which aren’t collecting and processing this carefully.

BVRLA study respondents said low-emission drivetrains are having the biggest effects on the industry, but Neville Jackson, chief technology & innovation officer at Ricardo plc, said it’s likely that the fleet of the future will use a mixture of technologies rather than switching en masse to electric cars.

The company is predicting continued downsizing and turbocharging of conventional engines over the next ten years, with widespread use of cost-effective micro-hybrid systems. New economy testing, which has a higher share of high-load driving, is expected to disadvantage hybrid drivetrains, while EVs are hamstrung by substantial price and weight disadvantages for the near future.

Even by 2040, Ricardo sees 90% of vehicles having an internal combustion engine, though 40% will feature some form of electrification. The focus, Jackson said, must be looking beyond the CO2 emissions in use, to make fuel and battery production greener too.

Jackson said: “There’s no silver bullet, no simple message for policy makers. It will need a range of solutions to meet future targets. It’s not helpful to demonise diesels as they have helped, but we do need to address air quality in cities. We need a focus on how to take old vehicles off the road, or stop them going into city centres.”