By Alex Grant / 2 years ago / Features, Top Stories / No Comments

The enclosed cabins of your fleet vehicles might be more harmful to your drivers’ health than you realise. But there is a solution, as Alex Grant explains. 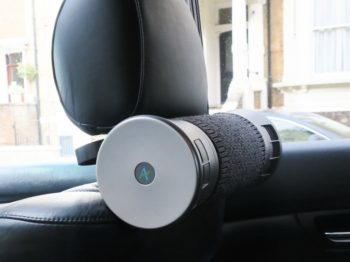 Airlabs says the Airbubbl can purify a vehicle cabin within 12 minutes.

What is the Airbubbl? It’s potentially a life-saver for urban fleets. Airbubbl is in-car air purifier, claimed to be the only device on the market which can trap harmful gases and particulates from exhaust fumes which can pass through the cabin air filter.

Why should fleets be concerned? This is the first consumer product developed by the British-Danish team at Airlabs, a company usually focused on cleaning air in large spaces. It’s designed to cure a problem many fleet operators are probably unaware of – with the windows closed, the air within their cars, vans and lorries can contain up to 140% higher concentrations of harmful pollutants than the air outside.

Air pollution has, of course, become a hot topic recently and councils throughout the UK, furthered by high-profile court cases, clean air zone plans and the diesel emissions scandal. And the figures are startling for professional drivers. Independent research has shown city-based commuters travelling 74 minutes by car each day are breathing in pollutants equivalent to passive smoking 180 cigarettes per year. For professional drivers, such as couriers or taxi drivers, that rises to 980 cigarettes per year. In addition to long-term health risks such as cancer, asthma, stroke and heart disease, exposure to polluted air can reduce alertness and impair reaction times.

Marc Ottolini, CEO of Airlabs, says: “Commercial drivers are forbidden from smoking in their vehicles because we all recognise the risks associated with smoking and passive smoking, yet we underestimate the damage that a vehicle filled with polluted air is having on the health of professional drivers. We want drivers and their employers to understand these risks and help guarantee a safe working environment.”

How does it work? The device itself runs from a USB port or cigarette lighter, and straps onto the passenger seat headrest. Its dual fans draw in air from the cabin, passing through an activated nano carbon filter, which traps pollutants including nitrogen dioxide, oxone, fine particles and bacteria and odours. Filtered air is pushed out through vents at each end, directed at head height to occupants.

According to Airlabs, it takes less than 12 minutes to clear the cabin of 95% of the pollutants. Drivers can control the device via a smartphone app, featuring a five-minute ‘boost’ option and the ability to log volumes of purified air to rank drivers against peers. This data could also, the company says, be integrated into a fleet dashboard with later versions of the software.

Where can you buy one? The Airbubbl is available from airbubbl.com, with an RRP of £299.99. Replacement filters cost £40. To discuss commercial rates, contact Gareth Jones: [email protected].