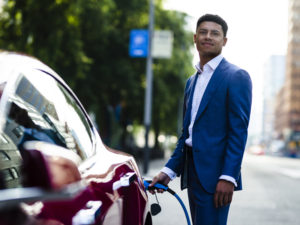 According to the firm’s calculations, the 1,808 organisations participating in Davos this year are collectively responsible for fleets containing approximately 810,000 vehicles.

If they were all to switch to a low-emission fleet, they could collectively cut three million tonnes of CO2 a year; based on an analysis of more than half a million vehicles in 32 countries, the average company vehicle emits 3.9 tonnes of CO2 a year.

LeasePlan’s data also reveals that the number of electric and hybrid cars in fleets has almost trebled since 2012  –  from 0.9% of all company cars then to 2.6% today.

The firm said continued action is required as average CO2 emissions rose slightly in 2017 for the first time since 2012. This is due to increased uptake of petrol vehicles, as well as the first rise in average mileage since 2013.

Tex Gunning, LeasePlan CEO, said: “Climate change, and how to prevent it, is one of the major topics at this year’s World Economic Forum meeting in Davos. Around half the cars on the road today belong to companies and a move towards cleaner fleets would be one of the best ways to reduce global emissions. Corporate fleets must be a part of this conversation. It is as simple as a decision from top leadership saying ‘we will make the switch’, and that can happen today. LeasePlan is committed to helping any organisation that wants to make a positive contribution to this historic challenge.”