Swede appeal: Steve Beattie on the evolution to ‘new Volvo’

Steve Beattie joined Volvo from Vauxhall in September 2017. Since then, the brand has gone through huge change, in terms of product and becoming more premium. Martyn Collins talks to the head of business sales about the current state of play in true fleet and his predictions moving forward. 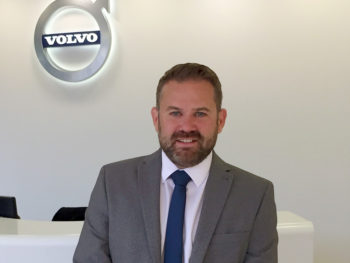 Considering we knew this was going to be a difficult year for fleet, how is Volvo doing?

“If we look at true fleet the market is 10% down, we are 43% up so we are tracking very well really. That’s for the first six months according to the SMMT.

“I think there’s a number of reasons for our improvement. Firstly, we’ve got to be thankful for the product. We’re in a very good place with the XC40; look at the growth of that, that’s now our number two best seller in true fleet. I would imagine by the end of the year, it will be our number one best-selling car. However, XC60 is still the best-selling car in true fleet, which has taken over the mantle from the V40, which is on run-out this year.

“If you look at where the fleet market is, you can see that the user-chooser driver has become more and more SUV-focused – and we’re in a really good place for that. XC40 has won several fleet awards too, it just shows the mindset of the whole fleet world that you’ve got to go towards smaller SUVs.

“Plus, we’ve got more versions of XC40 still to come, including plug-in, which is available to order now, with a circa £41,000 list price, plus CO2 of 38g/km. So that’s really, really exciting, as our plug-ins before have been aimed at senior management level. The XC60, XC90, S90 and V90 are quite large cars, and from a P11D perspective they’re high. We can now get a mid-manager into a circa £40k car with a twin engine. What’s good about that is that it’s a T5, so combined it’s about 262bhp, with the electric and petrol, so it’s really hitting the spot for your mid-manager user-chooser – I’m very excited about that car.

“The second thing is that this year we’ve introduced a couple of changes to the team. So, if you look at the breakdown of the team, from a large corporate perspective, we’ve got someone who purely concentrates on new business. They’re a hunter, giving my team more time to spend with their larger customers – making sure they’re getting into the nitty gritty of their fleet policies and understanding how we can support them. That’s one big thing, we’ve had a lot more time to spend with customers and add value.

“We’ve also introduced a virtual sales manager team, which has been a big success. In the first six months we’re really, really pleased with the feedback we’ve had from customers, but also the retail network has really engaged with it. It is quite a different way of doing business. Effectively we were generating leads ourselves, from the SME world and they were going into our virtual sales team that were effectively home-based. The reason that’s worked so well for SMEs is that it’s all about making Volvo the easiest premium manufacturer to work with.

“I’ve got a team able to quote and give demos on the phone, they’ve got all the time to support the customer. It’s quite an unrivalled success, but then, because we’re working so closely with the retailers, we’re finding stock with the retail network and then we’re saying, there you go Mr Retailer, here’s a package deal, ABC Engineering want to buy an XC40, here’s the rental, here’s the rate, here’s the quote. The retailers have got a lot of sales because we’re supporting the network and driving profitability.

“A retailer at a roundtable recently said to me, she was sceptical about it, because she was concerned that we wanted to take stuff away. [But] we want to give incremental business to them and support them. Retailers are very busy, because they are all over the place, when a lead comes through the internet, my team are literally calling the customer within 22 minutes now.

“The SME feels like they have a link in to the car manufacturer as well. If that continues, I’d be wanting to expand that team next year because it has been such a success. An SME isn’t expecting to be called back so quickly, they expect us to call back tomorrow or the next day. We’re finding this is really helping with engagement.”

You’re up in a true fleet market that’s down; do you think the general uncertainty nationally is holding you back from making even more sales?

“We’re so far up from where we were last year, so it’s interesting to say, ‘Could we be doing more?’ The answer is who knows. Obviously, business needs certainty, the wider industry is seeking clarity from the Government on what’s going to happen now, obviously we don’t have that clarity, but the recent Company Car Tax announcement is welcome.

“Talking of supply, what is really welcome is that, considering 22-23% of our true fleet mix is plug-in hybrid, next year our battery contracts kick in with suppliers, which means we have a lot more supply of batteries available, which is really exciting for me because with the new Company Car Tax rates both on PHEV and full-electric (which will come later for Volvo), we can see PHEV sales being really supported next year. We’re going to have a good diesel line-up, ticking one box for the high-mileage company car driver. But we’re also going to have far more supply of cars that our customers want, which is almost that halfway house before going full electric. You’ve got that 30 miles of range and you’ve got that back-up for the range anxiety. Company car drivers are committing for three years, so it’s nice to test things out.

“We’ve also got our mild hybrid range, which is the KERs system, which is all about the braking system. We’ve just launched that into XC60 and XC90, it goes into petrol models of those in Q4 this year, then we’re going to see mild hybrid rolled out to the rest of the range from next year. So, it’s all about electrifying the fleet as well, it’s not just plug-in or pure electric, it’s other alternatives now.

“We’ll probably have the same spec mix as retail, so you’ll probably see 35% Inscription and 20% Momentum and 45% R-Design. There or thereabouts. But because our Momentum is such a great spec, we’re seeing a lot of entry-level drivers getting into the car and they’re very happy, because you’ve got all the spec you require in a car. We’re seeing a lot of people go for that because of the lower P11D figure too.

“I think we’re in a really exciting time, with all the change going on and moving forward in the next couple of years. I think fleet managers will be looking at their policies every six months, because whereas you would have gone diesel only once upon a time, that’s changed, there’s hardly anyone diesel only, and the next part is when they introduce plug-in hybrid. It’s all about the processes around the hybrid vehicle, for example, if you’re charging with a company fuel card how does the company reimburse you for that? Everyone is going to have a different idea around that. I think it’s quite an exciting time to be a fleet manager.”

Do you think the fact that you’re only offering the S60 with petrol power has been a hindrance in the fleet market?

“An S60 Hybrid will be on sale at the end of this year but is available to order now.

“I think it’s all volume dependent; we’re actually quite happy with where it is currently. It is such a new car that we’ll see the volumes next year. We’re going to have a T6 Hybrid model, so again that’s going to be supportive, it will come in higher trim levels, so it will fit slightly above the BMW 3 Series plug-in today.

“Although that segment is declining, the volumes required for that car will probably be quite comfortable for us. If we wanted to go out and do the level of volume we’re doing with XC40, then certainly in the short-term you’d want a diesel engine in that particular car. With the new BiK taxation, we can really see how the CO2 will look in the petrol world and it will still be a competitive car even against diesel pricing. If you went back 10 years and said you were having diesel, we’d have all looked at you, because petrol was effectively what everyone drove. From a true fleet perspective, the S60 is a very small volume car.

“For me, the biggest opportunity next year is the XC40 twin-engine. I’m so excited about that car, I cannot wait! As I see it, there’s not a premium plug-in competitor for that car. If you’re looking for a plug-in for a similar value, it’s got to be the BMW 3 Series I’d imagine. More and more drivers have moved away from saloon C/D-segment cars to SUVs, so I think we’ll be in a very good place.”

You already have the hybrid models, with full electric on the way – how do you think this will change the fleet dynamic?

“At the moment, plug-in hybrid has all been aimed at a senior manager, director-level. This is because of the price, plus the power of the engine, but now we’re going to have a car with the right brake horsepower; 250 is about what people require today with a small/medium SUV. It’s a game changer for us.

“We always sell all our allocation of T8 models, I think the lead times on those cars will not necessarily be extended, because people will wait for them. Having more availability of plug-in hybrids and batteries available for us, I think it will be exciting to see what the demand is, when we’ve got more availability. Although XC60 T8 is our top-selling hybrid in true fleet, followed by XC90, then interestingly S90 and then V90.

“We’ve got so many advocates for Volvo now; the next layer is user-choosers – we need to make sure we’re getting to them. XC40 winning all the awards has been a testament to that. That said, there’s so many more people that we need to talk to, because there is still that perception of old Volvo, whereas we’re very new Volvo now – we’re quite cool.

“We’ve got a good demo programme now, where the fleet managers and lease companies work with it. You effectively book a demo and we will deliver it to your workplace between 9 and 5, you have it for a couple of days. It is great to live with a car for a couple of days, for people who want that extended drive, but for people who make their decision fairly quickly, we’re looking at offering shorter slots.”