Suzuki has revealed its 2017 S-Cross, which gains new engines and revised styling and grades. 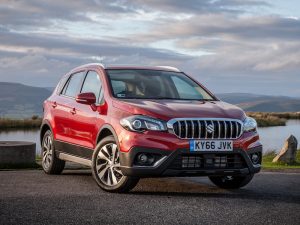 On display at this week’s Paris Motor Show, the facelifted C-segment crossover joins the line-up three years after the first S-Cross was launched and brings bolder front-end styling, including new headlights, plus updated tail-lights and ground clearance increased from 165mm to 180mm.

The smaller engine brings 9% more torque than the old 1.6-litre, standing at 125lb.ft, along with a 11% decrease in CO2 emissions to 113g/km with manual transmission or 119g/km with the optional automatic transmission. It also brings a 10% improvement in combined fuel consumption. The 1.4-litre offers 41% more torque at 162lb.ft and is also 17% more powerful and 4% more economical.

The 1.6-litre DDiS diesel is also offered and brings CO2 emissions of 106g/km with fuel consumption of 68.8mpg on the combined cycle for the two-wheel drive version. All engines come with Auto Stop Start system.

Drivers can also specify Suzuki’s Allgrip four-wheel drive across the engine line-up and on the two higher grades. CO2 emissions for the new 1.0-litre Boosterjet petrol engine with manual transmission are 119g/km and 127g/km for the 1.4-litre, rising to 128g/km for the automatic 1.4-litre version. The 1.6-litre DDiS engine Allgrip model has a figure of 114g/km.