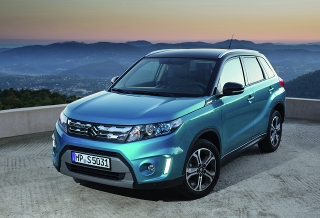 On sale from next month, the five-door Vitara crossover is priced from £13,999 and brings a dynamic new look along with a range of personalisations options.

Commenting on the model, Dale Wyatt, Suzuki UK sales and marketing director, said: “Our aspiration in the long term is to grow our fleet presence in the UK using the Vitara as a trigger car. We thought that maybe the S-Cross would do that job, but that's niche product from a niche manufacturer that isn't going to be a significant part of a lease company's portfolio. It was difficult, to be frank, to get their attention."

“In order to make a difference you have to have end-user pressure,” added Wyatt. “In other words, we think this car is an attractive enough proposition to get end-users talking to fleet managers and leasing companies and asking them to add it to the list.”

The Vitara has moved away quite a bit from its original product values; is that because the original customer base no longer exists?

“I think so,” Wyatt agrees. “I think it's regrettable because the world needs a car like that, but I think those days are going… For instance, we're seeing the end of the Defender; we're seeing Land Rover become more car-like and prestige in their behaviour, and I think that's where the market and the consumers are driving us, I really do."

Nonetheless, with AWD capability comprising less than 10% of SUV market these days, do you still want Suzuki to have stronger showing than average?

“We've got a strong 4×4 heritage and a large customer base that live in rural areas,” said Wyatt. "They don't need off-road capability per se, but they do need all-road or any-road capability… They haven't got to cross fields and tracks but they do live in areas where the weather can present difficult conditions. So they value a car that will always get them to work; the Vitara can do that."

Wyatt also commented on concerns that the Vitara and S-Cross are too close to filling the same market niche. “I think our two areas of expertise are small cars and off-road,” he said.

“And I think the S-Cross and Vitara are close. But we talked about the S-Cross as being a crossover… And if you look at it and squint it's more like a sportwagon – I think it's certainly a sportwagon in terms of design and practicality. So if you view the S-Cross as a straightforward, utility C-segment car and the Vitara as a compact SUV then you do end up with two different propositions.”