Plans for scrappage schemes to restart car sales need to be targeted to ensure uptake of zero-emission, clean solutions, rather than promoting high CO2-emitting vehicles. 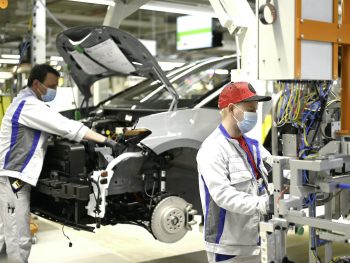 One of the first reopened VW factories is in Zwickau where its ID.3 electric car is manufactured

Sustainable transport campaign group Transport & Environment says that while many governments and the EU are putting together public stimulus programmes to relaunch the economy and bring jobs back, recovery needs to be green to build on the clean air momentum seen during lockdown.

With both the European Automobile Manufacturers’ Association (ACEA) and the UK’s Society of Motor Manufacturers having called for vehicle scrappage schemes to be implemented – and reports that governments such as Germany are mulling over scrappage plans – T&E’s Julia Poliscanova, director, clean vehicles and emobility, has warned that such schemes are a waste of taxpayers’ money. She’s pointed out that drivers on low incomes or have just lost their jobs don’t buy new cars, even with a discount; instead, those who would have bought a new car anyway simply bring their purchase forward.

Poliscanova also warned that the scrappage schemes seen after the global financial crisis led to uptake of vehicles later found not to live up to their claims, as per the Dieselgate scandal.

T&E has also highlighted that government aid such as France’s €5bn loan guarantee for Renault should only be used for “future-proof” powertrains and not to produce more diesel or petrol engines.

To ensure uptake of zero-emission, clean vehicles, the organisation has set out its five-point plan for public support, recommending:

Poliscanova commented: “It’s time to put the money where grand words are. Propping up cars running on combustion engines will make the car industry’s business model obsolete. Back in 2009 we spent billions on new cars that we were promised were clean, only to be repaid by the Dieselgate scandal a few years later. Let’s not make the same mistake twice. Out with the old, dirty engine, and in with the new zero-emission motor.”