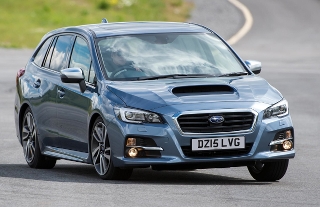 The new sport tourer model, which made its European debut at the 2015 Geneva Motor Show, has previously launched in Japan.

The model is pitched as a ‘spiritual successor’ to the fourth-generation Subaru Legacy Tourer (2003-2008) but offers greater interior space than its forebear despite its compact on-road footprint. It also brings a 522-litre boot – rising to 1,446 litres with the second row of seats folded down.

The Levorg will be available with one engine: a newly developed 1.6-litre DIT (Direct Injection Turbo) Boxer petrol engine, which has been engineered specifically for its application in the Levorg and is paired with Subaru’s Lineartronic (CVT) transmission and its Symmetrical All-Wheel Drive system, Vehicle Dynamics Control and torque vectoring.

The new 167bhp 1.6-litre DIT power unit offers the same performance as Subaru’s existing 2.5-litre naturally aspirated Boxer engine, despite being 36% smaller. The Levorg accelerates from 0 to 62 mph in 8.9 seconds, while returning nearly 40mpg on a combined cycle. Emissions are rated at 164g/km.

The Levorg is equipped as standard with the new ‘Subaru Rear Vehicle Detection’ system (SRVD), which combines three technologies: Blind Spot Detection, which alerts drivers to cars sitting in their blind spot; Lane Change Assist, which warns drivers of fast-approaching vehicles behind when the driver indicates to change lane; and Rear Cross Traffic Alert, which detects vehicles passing behind when reversing out of a parking space.

The new model also features SI Drive (Subaru Intelligent Drive) which allows the driver, via a switch on the steering wheel to choose between two modes according to their mood or the driving environment – Intelligent mode and Sport mode.