Over one in 10 (14%) of drivers admit to committing illegal offences such as speeding as a result of feeling emotional. That’s the finding of a new study that shows the effects of drivers’ emotional state on their behaviour behind the wheel. 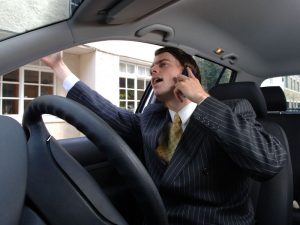 Jo Hemmings explained: “Like so many driving behaviours, anything that drifts from a state of equilibrium is always a potential problem on the road.

“If you’re feeling giddy with joy, you’re likely to be self-absorbed, which may impair your concentration. So make sure you focus on the journey rather than letting your mind wander. When feeling happy, your heart rate could increase from a standard 60 BPM to 100 BPM. Also, feel-good hormones such as dopamine and serotonin flood our bodies. This can make us feel highly alert but this can sometimes impair focus and concentration while driving.

“Focus on your speed as happiness is just as dangerous as anger. Happy drivers are more likely to speed or run red lights due to feeling invincible and powerful.”

The research also finds that driving while angry triples the heart rate, making it the most dangerous of emotions, while more than one in three (34%) couples argue while driving in the car

Hemmings added: “The most obvious manifestation of anger behind the wheel is road rage. We become territorial in our cars and any threat to our territory or behaviour can be perceived as an affront. This makes us angry and causes us to take revenge without due consideration for the consequences. This is not only aimed at those that have caused the anger but other road users too without due consideration for the consequences.

“However, other common situations that instigate anger include driving while arguing, driving after an argument, and driving after a bad day at work.”