By Alan Trojanowski / 1 year ago / Features / No Comments

Ford wants to shift expectations of electric vehicles with its battery-powered, Mustang-inspired SUV. And there’s more to it than marketing, as Alex Grant explains. 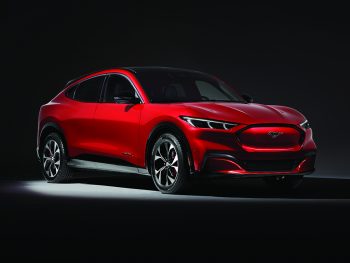 Electric vehicles can be costly to produce, so Ford is leveraging economies of scale to keep its products affordable. A compact car based on the Volkswagen ID.3’s modular platfform is due in 2023, while the Mustang Mach-E is the first model on a larger EV-only architecture which can also be scaled up or down to suit other segments.

Significantly, the platform offers efficient and unobtrusive packaging of the battery pack beneath the cabin, paired with motors at the rear or both axles. The pack is designed to be as simple as possible to manufacture, scalable to suit customer needs and capable of charging at 150kW. Ford is one of several manufacturers funding the pan-European Ionity fast-charge network and, using one of
these points, the Mustang Mach-E can regain 57 miles of range in around 10 minutes.

Customer clinics suggested drivers were cautious of electric vehicle technology, so ease of use was a priority throughout. The doors unlock automatically when they detect a paired smartphone and pop open using buttons instead of handles, while most on-board functions can be found within the 15.5-inch tablet-style touchscreen on the dashboard.

Behind this is a high-speed data connection which unlocks further customer-friendly features. The navigation will plot routes
based on the fastest available charging points, and the FordPass smartphone app will give cross-network access to 125,000 across
Europe with a single account. Every system on board can also be updated over the air, enabling further optimisation of the user interface and the drivetrain based on anonymously collected real-world usage data. In turn, this could deliver new features, better usability and, potentially, range improvements too.

Ford hasn’t had a mass-market EV in Europe before, but the Mustang Mach-E shows it’s been paying closer attention to customer demands than the niche-selling Focus BEV. At £40,000-£55,000, it’s priced to go head to head with the Tesla Model 3 and Model Y SUV due later this year, while the eight-year, 100,000-mile battery warranty is aimed at shoring up residual values and competitive lease rates for markets such as the UK, where this is the norm.

Ride, handling and steering were benchmarked against the similarly sized Kuga ST-Line, so expect it to be balanced in daily use, and Ford will offer a choice of rear- or four-wheel drive versions with 75.7kWh or 98.9kWh battery packs and ranges between 261 miles and 373 miles. Most pre-orders are for the bigger pack. A 465hp GT version, with further chassis upgrades, will follow in 2021.

An electric Mustang SUV? It might sound gimmicky, but this is positioned as an aspirational mainstream product and Ford of Europe president, Stuart Rowley expects fleets to account for a sizeable share of UK volume. Muscle car badge cachet, high performance and low company car tax add up to an interesting alternative to the numerous premium-brand SUVs – all backed by Ford’s significant fleet expertise.