By Martyn Collins / 10 months ago / Features / No Comments

Citroën wants to re-invent the small family class with its SUV-like, C4 hatchback range. A full-electric version from launch also adds to its appeal, as Martyn Collins explains. 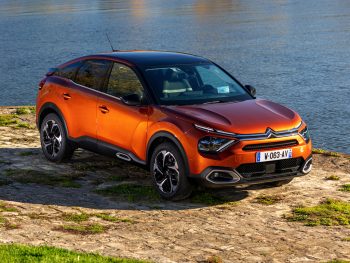 The styling of the new C4, looks more evolution than revolution, with elements of Citroën’s most recent C5 Aircross crossover, plus the likeable if slightly eccentric C4 Cactus visible in the design.

The current Citroën family nose, with its familiar double stage headlights remains, although the V-shaped signature is new and was most
recently previewed on its birthday present to itself, the 19_19 Concept car. The rear lights, as with the front, have the same V-shaped light signature.

However, perhaps appreciating the move from small family cars to SUVs, Citroën has given the new C4 a taller stance. Plus, more rugged looking lower plastic cladding – which suggests crossover – rather than the conventional approach taken by Focus and Astra hatchback rivals.

Citroën’s most recent new models, such as last year’s C5 Aircross have majored on comfort rather than dynamism, and the new C4
continues this theme.

As with the C5 Aircross and previous C4 Cactus, the new C4 is fitted with Citroën’s clever Progressive Hydraulic Cushions, where two hydraulic stops, one for compression and the other for decompression, are added to each shock absorber. In everyday use, they help vertical movements, equalling Citroën’s iconic ‘magic carpet ride’. In bigger impacts, the hydraulic stop absorbs and dissipates energy.
Another unique, comfort-related innovation exclusive to Citroën, is the Advanced Comfort seats fitted across the range, in order to
make the most of the C4’s loftier driving position. Wider and more supportive than usual, these can also be heated and fitted with a
massaging feature too.

As the new C4 is built on the PSA Group’s CMP modular platform, which can accept both electric and conventional powertrains, a new all-electric e-C4 will be launched alongside the petrol and diesel versions of the new C4. Part of Citroën’s electrification offensive, the e-C4 will offer an official WLTP range of 217 miles range and 134hp from its 50kWh battery.

The e-C4 looks almost exactly the same as the hatch, the only differences being the lack of exhaust pipe, and the addition of e-C4 badging and blue highlights.

If battery is not for you, Citroën still has you covered in the C-segment, as the C4 will also be offered with a range of petrol engines with power from 100 to 155hp and diesel units rated from 110hp to 130hp.

With its crossover style combined with distinctive Citroën family looks, the C4 certainly stands out more than the previous C4 and the
perhaps too quirky C4 Cactus that it also replaces. The fact the C4’s new CMP modular platform can support multiple powertrains is
sure to acoomodate the changing needs of fleet drivers – especially with the competitive range and financial benefits gained from going electric.