Cars with dangerously low tread depths have been ‘clamped’ by spoof traffic wardens as part of a Kwik Fit campaign to raise awareness of the importance of tyre condition. 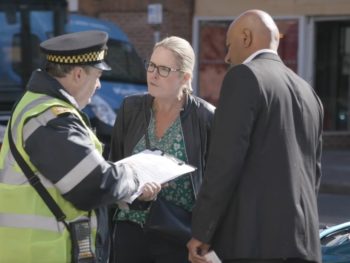 According to the automotive servicing and repair company, only a quarter (25%) of drivers know the legal minimum tread depth is 1.6mm while its research also found more than one in 10 admit to not even knowing what ‘tread depth’ means. And 4% even said it depends on the make of tyre.

The Kwik Fit research also found that just 11% of motorists are aware of the potential penalty for driving with tyres below the legal tread depth. Drivers risk three penalty points and a fine of up to £2,500 per tyre if their tyres do not comply with the law. This means that a full set of illegal tyres could see drivers losing their licence and facing total fines of up to £10,000.

Kwik Fit’s campaign also used hidden cameras to capture the reactions of the drivers on discovering the claim (click here for the campaign video). The drivers’ emotions went from anger when they found they had been clamped, to concern when it was highlighted to them how low their tyre tread was, and gratitude that they had been saved from the potential of a costly penalty and awarded a free tyre for being a good sport.

Roger Griggs, communications director at Kwik Fit, said: “There are simple checks, such as the 20 pence piece test, that drivers can perform themselves to ensure their tyre tread depth is legal. We are very sorry to those drivers who got a temporary shock in our clamping campaign, but we hope that this activity helps remind drivers to make regular checks on their tyres.  For anyone not confident in checking by themselves, our centres offer a tyre check service to give peace of mind to motorists.”