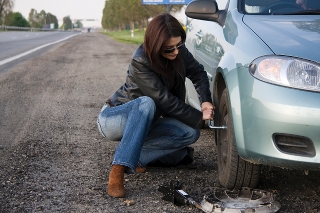 Does your car have a spare wheel? It might seem like an obvious question, but the answer has become increasingly complicated as technology has begun to replace something which was once a very valuable backup for motorists.

The spare wheel might seem an unlikely casualty of the pursuit of fuel economy, but it’s a low‐hanging fruit for car manufacturers. With factory wheel sizes increasing, it’s not unusual for a full‐size spare wheel to weigh between 25 and 30kg and cars with full‐size spare wheels are already in the minority, and puncture repair kits are steadily replacing the space‐saver wheels which followed them. With EU‐set fleet average emissions of 95g/km set by 2020 and the rise of hybrid batteries, AdBlue tanks and subwoofers in vehicle boots, this is likely to be an ongoing trend.

Is it a problem?

As with anything other than a full‐size spare wheel, puncture repair kits have limitations. The damage must be less than 4mm in diameter and in the central part of the tread if the tyre is to hold air afterwards. It’s also not permanent, and there’s a 50mph speed limit on a repaired tyre – like a space‐saver, consider it as a way to get you home, or to the nearest tyre stockist.

So it’s certainly a growing issue. Figures from the RAC show incidents of punctures where the vehicle has no spare have already quadrupled since 2010, reaching 118,011 callouts in 2014, and the forecast is 168,000 in 2016 as fewer vehicles come with spare wheels.

Of the four million UK drivers – 11% of the total – who have a puncture repair kit, according to Kwik Fit, three million of them also said they carry a spare wheel as an added backup. In many cases a spare wheel is a cost option when ordering the car, though not all vehicles come with a compartment to store it.

The downsides of spare wheels

The familiar technology isn’t foolproof, either. An estimated 10‐20% of UK cars are on under‐inflated tyres, and motorists are prone to neglecting the spare. Of the 18,806 AA members polled in January, only two thirds said they’d checked their spare wheel, and only half had checked it in the last six months. Many of them could be carrying underinflated wheels.

Kwik Fit’s data suggests further problems, showing 36% of drivers don’t know how to swap a wheel and 10% don’t carry the tools to do so. Many fleets have policies forbidding drivers to change wheels at the roadside, for their own safety, and The Highway Code forbids it on motorways.

Carrying a spare wheel isn’t necessarily a solution, and in some cases it may actually be simpler for drivers to use a puncture repair kit, or just to phone their recovery service for assistance.

The AA’s advice is clear. “We also know that quite a few people aren’t comfortable changing a wheel, either lack of knowledge, tools or desire to do so – say they’re in smart clothes or in a vulnerable location,” a spokesperson told Fleet World. “There is actually more to changing a wheel correctly and safely than some will realise. If people aren’t sure or are in a vulnerable location, we would far rather they called us out – it’s why you have breakdown cover, after all.”

Recognising the decline of spare wheels as factory equipment, British company Dynomec has launched a solution for breakdown companies. Its universal spare wheel features five moving bolt holes, which means it fits most new vehicles, and a fourstud version is under development.

Already in use with AA and RAC patrols, it’s a temporary fix to get cars back on the road. It still carries a 50mph speed limit, but has a larger contact patch than a space saver and means car and van drivers aren’t reliant on carrying their own spare wheel.

There’s also a system in place for tyre stockists to courier the wheel back to the recovery company which owns it. Head of RAC technical operations, Phil Ryan, says: “The universal spare wheel provides additional options for patrols to deal with breakdowns more quickly and effectively. We are already seeing very positive results from the trials and we expect the universal wheel to become an increasingly common sight on our roads.”