South West Water has reported fuel savings in excess of 15% and improvements in the efficiency of its drivers through the use of the Lightfoot driver behaviour solution. 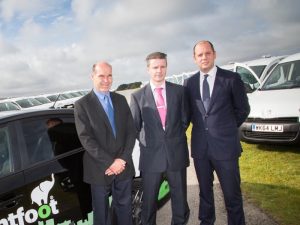 Following an extensive 14-month trial of the in-cab driver coaching solution, South West Water has rolled out the technology to improve the safety, well being and efficiency of its drivers in more than 500 of its vehicles.

Mark Karkeek, fleet manager for South West Water, turned to Lightfoot after trialling a number of solutions to maximise the efficiency of the fleet, and to help its drivers become safer and more aware of their driving styles.

Encouraging results from an initial trial on 10 vehicles, including ‘blind’ testing, led the company to extend the trial to a further 54 vehicles. During the subsequent trial, which ran for over 12 months, South West Water saw fuel savings in excess of 15% with a 25% uplift in the amount of time spent by drivers in the optimum ‘green zone ’.

“We’ve been very impressed with Lightfoot from day one,” said Karkeek. “During the blind trial we saw driver efficiency rates hovering at around 65%. Once Lightfoot engaged, that rose to just shy of 90% and many drivers have excelled, achieving percentages in the high 90%s.”

South West Water will be looking closely at its service, maintenance and repair spends to see what positive impact Lightfoot has on lowering these costs.

The business has also reported benefits from the simple reporting. As with all its clients, Lightfoot provides South West Water with a weekly traffic-light report requiring no intervention. Drivers high in the green zone are consistently operating in the optimum efficiency sector. Drivers high in amber are flagged as a potential concern (but tend to respond quickly to Lightfoot), while drivers in red require attention, possibly through driver training to address any specific and regularly occurring issues.

Karkeek concluded: “Lightfoot helps us to achieve significant results without taking up too much management time. This, combined with the prospect of consistent fuel savings and the opportunity to develop a team of more empowered, efficient and safer drivers, formed the basis of a compelling business case to roll Lightfoot out to more than 500 of our fleet vehicles.”