Smart platform to more than halve the cost of charging

A new smart charging platform said to more than halve the cost of charging plug-in vehicles compared to regular charging has launched in the UK. 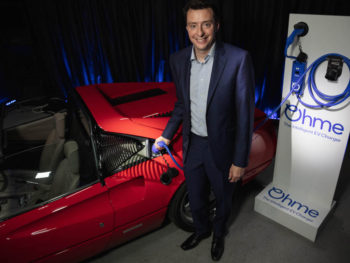 The Ohme smart charging cable provides an app-controlled, intelligent EV charger that automatically chooses the cheapest available electricity and then calculates how much power is needed for the driver’s next journey so the car ends up with the exact right amount of power – and all controlled via an app or through voice recognition.

When combined with a time-of-use energy tariff, such as that offered by Octopus Energy, Ohme can deliver EV running costs as low as 2ppm, saving drivers money compared to typical rates of 4ppm for a regular EV charger while also benefiting the UK power infrastructure by shifting load away from peak periods. Drivers can also choose to charge at times of higher renewable energy.

Ohme’s smart cable is universal – it works with all electric vehicles and can be used with any plug type including a traditional three-pin socket, plus it can plug into existing EV chargepoints to upgrade to smart capability. Using a dedicated commando socket, Ohme can deliver a faster charging rate of 25 miles per hour (7kW) and 8-9 miles per hour with a three-pin plug.

Commenting on the launch, David Watson, CEO of Ohme, said: “Electric vehicle drivers have been crying out for an easy to use, cost-effective smart charging solution and Ohme is just that. Not only will we help accelerate the mass adoption of EVs by revolutionising the domestic charging landscape, we will take a lot of the capacity strain and financial stress off the electricity network operators.”