The UK’s smart motorway network is likely to be radically overhauled as new research finds 38 people have been killed on smart motorways in the last five years. 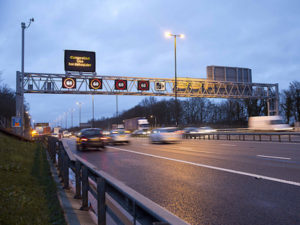 The data has been revealed by the BBC ahead of a Panorama special tonight (27 January 2020) as a review commissioned by Transport Secretary Grant Shapps into such schemes continues.

A Freedom of Information (FoI) request sent by Panorama to Highways England has revealed that on one section of the M25, outside London, the number of near misses had risen 20-fold since the hard shoulder was removed in April 2014; from 72 in the five years before the road was converted, to 1,485 in the five years after.

The FoI request also revealed that one warning sign on the same stretch of the M25 had been out of action for 336 days.

Speaking at the time the review was announced, Grant Shapps said “We know people are dying on smart motorways” while Highways England chief executive Jim O’Sullivan commented in a Transport Committee session that such schemes are “too complicated” for drivers.

According to the BBC, the review is likely to see more emergency areas introduced for drivers – currently, such SOS areas are up to 1.6 miles apart on permanently converted ‘all-lane running’ smart motorways – along with increased radar detection of broken-down vehicles.

Both measures will help allay some concerns from motoring and road safety organisations over smart motorways.

However, as the RAC says, questions need to be asked as to why this has not been carried out to date, in particular with a report by The Times indicating that the number of SOS areas was cut to save cash.

Head of roads policy Nicholas Lyes said: “A commitment to install stopped vehicle detection technology on the whole smart motorway network would be a welcome step and something the RAC has called for consistently in recent years.

“RAC research suggests that more than two-thirds of drivers believe that permanently removing the hard shoulder compromises safety in the event of a breakdown. Simply ploughing on with the status quo regardless isn’t an option anymore. However, three years to install this across the network is a long time to wait and questions must be asked as to why this hasn’t already been rolled out universally to date. In the meantime, we would suggest Highways England gives consideration to installing extra cameras to help pick up vehicles in trouble on live lanes to help mitigate for the delay. It is vital that drivers have confidence in the road infrastructure that they are using.

“In addition to this, we have long said the distance between SOS areas was too big so we would welcome a commitment to install more to increase the chances of vehicles being able to reach one in the event of a breakdown and a widescale public information campaign.”

Meanwhile road safety charity Brake has gone one step further and demand that further smart motorway rollout be stopped if they are proven not to be safer than regular motorways.

Joshua Harris, director of campaigns for Brake, said: “The number of deaths on smart motorways, and the huge increase in near misses reported on the M25, is a serious cause for concern. Safety, not traffic flow, must always be the priority on our roads and unless smart motorways are proven to be at least as safe or safer than regular motorways there should be an immediate U-turn on their rollout. Every road death and serious injury is a preventable tragedy and we should be introducing roads that save lives, not ones that further endanger the people who use them.”

A Highways England spokesperson said: “The Transport Secretary has asked the Department for Transport to carry out, at pace, an evidence stocktake to gather the facts about smart motorway safety. We are committed to safety and are supporting the Department in its work on this.”