The first smart motorway in the north west is now fully operational and is expected to tackle congestion in the Greater Manchester area. 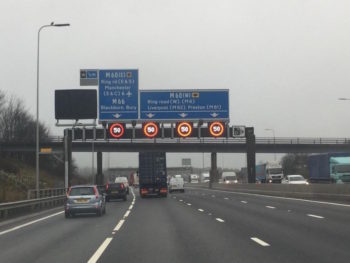 The scheme provides an extra running lane in each direction along the M62 between junction 18 and junction 20, as well as smart motorway technology, such as CCTV cameras and electronic signs, along both M60 and M62 sections. Drivers are also being encouraged to visit official Highways England advice on using smart motorways.

Highways England senior project manager Jonathan Stokes said: “Although this is the first smart motorway in the North West the system has been running successfully in other parts of the country for several years – including around Leeds – and we’re confident it will deliver safer, smoother and more reliable journeys.”

However, motoring lawyer Nick Freeman, who has famously cleared celebrities for a range of road traffic offences, has spoken out against such schemes.

Freeman said: “Smart motorways are a dangerous distraction with constant sign changes, a paucity of accurate information, inexplicable speed restrictions on empty stretches of road, and the use of the hard shoulder as a running lane at times of congestion – a ridiculously dangerous idea, which increases the vulnerability of drivers who break down before they can reach a refuge area.”

Earlier this year, GEM Motoring Assist called for the Highway Code to be updated to contain smart motorway advice after a survey of 2,574 drivers by the road safety and breakdown organisation found nearly two-thirds (64%) of respondents said they had concerns about smart motorways

And recent RAC research found 52% of drivers don’t know what an emergency refuge area (ERA) on a smart motorway is or that they should use them in the event of a breakdown or an accident in the absence of a hard shoulder.