Škoda is launching its first-ever mild hybrid, which debuts on the new fourth-generation Octavia to bring increased petrol engine efficiency. 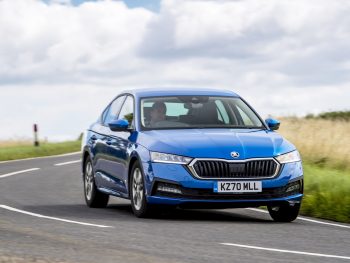 Priced from £23,005, the 110hp 1.0 TSI arrives ahead of the plug-in hybrid versions – including a vRS iV version – and heralds the launch of Škoda’s new ‘e-TEC’ designation for mild hybrid cars.

Due to be joined later this year by a 1.5-litre version, the 1.0 TSI e-TEC uses a combined 48V lithium-ion battery and belt-driven starter-generator to enable the engine to coast for extended periods, without affecting essential systems such as power steering.

The mild hybrid system can also recover energy during braking and store it in the battery, providing a boost to support the petrol engine.

The mild hybrid technology has been deployed alongside a number of other measures to enhance the efficiency of the Octavia’s 1.0 three-cylinder TSI engine, such as a variable vane geometry turbocharger and coated cylinder liners. WLTP combined emissions start from 115g/km.

The Octavia 1.0 TSI e-TEC will be open to orders from 22 September.