Skoda has unveiled its first seven-seater, a flagship SUV called Kodiaq which is due to arrive in the UK next year. 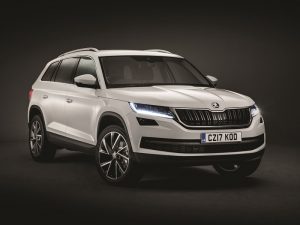 The Kodiaq is Skoda’s first seven-seater, and launches in 2017.

Similar in size to a Nissan X-Trail, the Kodiaq was previewed by the VisionS concept at this year’s Geneva Motor Show, and is slightly shorter overall than a Superb. Yet it offers space for seven, with the optional third row fitted, and an above-average share of the overall length is said to be cabin space.

Flexibility is high on the Kodiaq’s priority list. Boot space is said to be best in class, and the folding passenger seat offers a load length of up to 2.9 metres. It can tow up to 2.5 tonnes, the infotainment system features Google Earth services and a birds-eye view parking assistant and the rear bench slides to increase the cargo capacity.

The UK engine line-up is unconfirmed, but the 148bhp and 188bhp versions of the 2.0-litre TDI are both likely to be available, the latter getting four-wheel drive and DSG which are expected to be options on the former. Skoda has indicated fuel economy of up to 56.5mpg and 131g/km CO2 emissions for the lower-powered version.

There will also be 1.4 and 2.0-litre petrol engines, ranging from 123bhp to 178bhp, and the petrol-electric drivetrain fitted to the VisionS concept suggests there might well be a plug-in hybrid version in future, with CO2 under 50g/km. The platform, shared with the Superb, keeps weight relatively low to help maximise economy.

Pricing is expected to be announced later this year.