Škoda has revealed technology highlights of its forthcoming compact-sized Scala, which will include a mix of petrol and diesel turbo powered engines. 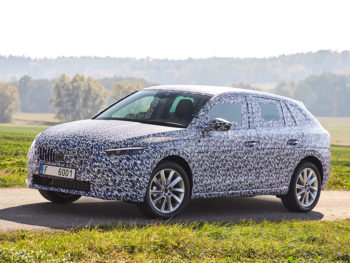 Four engine variants will be available, ranging from 89 to 148bhp. They include three petrol engines with particulate filters and one diesel. All of the engines come with direct injection and a turbocharger as well as Stop/Start technology and brake energy recovery.

The four-cylinder 1.6 TDI outputs 114bhp and 184lb.ft torque. An SCR catalytic converter with AdBlue injection as well as a diesel particulate filter come as standard – and it complies with the Euro 6d-TEMP emissions standard. The diesel engine is coupled with a 6-speed manual gearbox as standard, or a 7‑speed DSG as an option.

Additional highlights include a high level of active and passive safety, full-LED headlights and tail lights and a Sport Chassis Preset option. Other Volkswagen Group technologies are making their way into the Scala, including virtual cockpit and a large 10.25-inch display.

Christian Strube, Škoda board member for technical development, commented, “The new Škoda Scala is based on Volkswagen Group’s flexible MQB platform. This not only makes it possible to use the state-of-the-art drive and chassis components, but also allows access to numerous new driver assistance systems that – until now – have only been seen in higher vehicle segments, either for the first time or in enhanced versions. In combination with numerous passive safety systems, the assistance features elevate the Škoda Scala to a very high level of safety.”

Taking care of passengers, the Scala protects occupants with up to nine airbags and an array of protection systems, including optional proactive occupant protection that shuts windows and tensions the front seat belts in an emergency situation. Following an accident, Multi-Collision Brake prevents the vehicle from rolling any further in an uncontrolled manner.