Skoda has opened order books for the new Scout version of its Kodiaq seven-seater SUV. 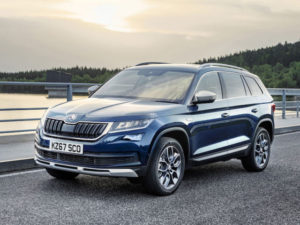 Debuted earlier this year at the Geneva Motor Show, the Scout model provides offroad styling and four-wheel drive as standard.

Priced from £32,330 and positioned between the SE L and Edition models, the Scout brings exterior features including 19-inch alloys, bespoke Scout off-road front and rear bumpers, a rear diffuser and Scout badging. It also features an engine guard and underbody stone guard.

Petrol engines cover the 148bhp 1.4 TSI petrol from the standard Kodiaq along with a 177bhp 2.0 TSI.

The two diesels are taken from the Kodiaq line-up and comprise the 148bhp and 187bhp 2.0-litre TDIs. Emissions start from 144g/km for the lower-powered diesel.

The 148bhp units are offered with a choice of standard six-speed manual gearbox or a seven-speed DSG while the higher-powered units are equipped with the DSGs as standard.

All engines come with an off-road mode that includes Hill Descent Assist.For more of the latest industry news, click here.