Skoda has revealed its Kodiaq Scout model, which brings offroad styling and all-wheel drive as standard. 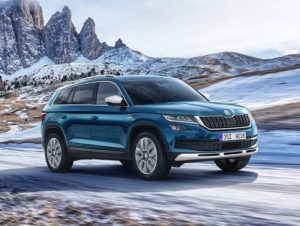 Compared to the standard seven-seat Kodiaq, which opened for ordering in November, the Scout version adds in silver detailing, tinted rear window and rear side windows, bespoke 19-inch wheels and Scout badging.

It also offers a ground clearance of 194mm, ramp angle of 19.7 degrees and approach and departure angles of 22.0 and 23.1 degrees.

Equipment is based on the Kodiaq SE trim and also adds in Off-Road Assist as well as a front and rear Park Assist. The Kodiaq Scout also offers the Driving Mode Select function with different set-ups for Eco, Comfort, Normal, Sport, Individual, Snow.

Petrol engines include the 148bhp 1.4 TSI petrol from the standard Kodiaq along with a 177bhp 2.0 TSI.

The two diesels are taken from the Kodiaq line-up and cover the 148bhp and 187bhp 2.0-litre TDIs. Emissions start from 139g/km for the lower-powered diesel with official combined consumption of 53.3mpg.

All engines come with all-wheel drive. Transmissions cover a mix of manual and DSG gearboxes, with the 177bhp petrol and 187bhp diesel only available with DSGs.

Pricing and full specification details have not been announced yet.

Previous: £64m government funding to boost cycling and walking to work
Next: Drivers left in the dark under council saving initiatives