Škoda Kodiaq gets access all areas on ambulance fleet

A specially converted Škoda Kodiaq has joined the Great Western Air Ambulance Charity, enabling the critical care team to cover all areas thanks to its 4×4 capability. 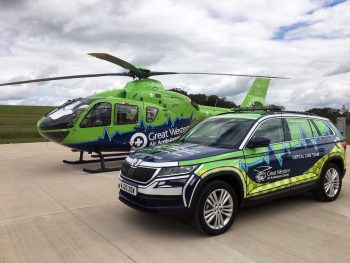 The charity runs a fleet of critical cars for its Helimed 65 helicopter can’t fly or when the location of the patient is easier to access by road.

The fully converted Kodiaq will transport the service’s critical care team – made up of both paramedics and doctors – to reach and treat critically ill patients across areas of Somerset and Gloucestershire.

Not only does the Kodiaq’s 4×4 capability make it the ideal addition but its cavernous space also enables it to store life-saving emergency equipment. Its 720-litre boot has been converted to house everything required for the scene of an incident, such as oxygen tanks and ventilators.

The vehicle’s infotainment system has also been moved to allow for a 999-response screen to be installed, providing the on-board crew with details of each emergency and the quickest route to the scene.

Finishing touches to the vehicle, all provided by Škoda’s approved convertor Halls Electrical, include a bespoke air ambulance livery and lighting system so that the vehicle is clearly identifiable.

John Wood, air operations officer at Great Western Air Ambulance Charity, said: “Having reliable, appropriate and fully equipped cars are essential for us to reach and treat patients in the most effective way. The new Škoda vehicles will enable our team to negotiate tougher terrain and drive safely in challenging weather conditions to reach patients quickly and safely, particularly in rural areas.”