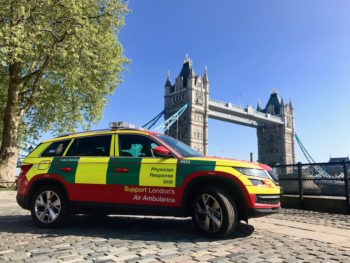 The charity has deployed three Octavia vRS estate models and two Kodiaq 4x4s, which are being used to deliver advanced trauma medics to critically injured patients.

The five new vehicles, which are on a three-year lease deal through Volkswagen Financial Services, will act as the ground support alongside the service’s two helicopters. The cars are based at The Royal London Hospital in East London and are driven by the service’s paramedics and navigated by an advanced trauma doctor; ready to respond quickly to an emergency.

Paul Smith, driving standards manager at London’s Air Ambulance, commented: “We provide a vital service to the capital transporting an advanced trauma doctor and paramedic to seriously injured people. Whilst the helicopter can reach patients in a matter of minutes, our fleet of rapid response cars is also critical to serve the community and ensure that we are ready to respond instantly in all-weather conditions. The reliability and performance of Škoda continues to meet the demand of our service and we are pleased to renew the contract once again.”