‘SizeMark’ standard could help cut down on parking prangs 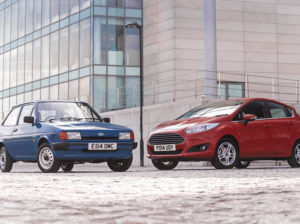 The UK’s current best-selling car, the Ford Fiesta is 10% wider than the original 1976 version

So says car parking marketplace, YourParkingSpace.co.uk as research from Accident Exchange points to a 35% surge in parking prangs since 2014.

According to Accident Exchange, average car parking spaces in Britain are now too small to cope with larger vehicles, including family SUVs which are growing increasingly popular, leading to nearly £1.4bn of car park prangs every year.

This is backed up by research from YourParkingSpace.co.uk, which finds that parking spaces have remained approximately the same size over the last 60 years while some vehicle models have grown by more than 20% in width. Today’s Mini Cooper is 24% wider than the 1959 original while the Volkswagen Golf is nearly 12% wider than its original 1974 version; while the Ford Fiesta is 10% wider than the original 1976 version.

This week has also seen National Car Parks (NCP) tell the BBC that car parking spaces are having to be made bigger to meet the growing size of family cars and 4x4s.

“It’s time the parking industry recognised that cars are getting bigger and introduced recommended minimum parking space sizes,” commented Harrison Woods, managing director at YourParkingSpace.co.uk. “We first proposed SizeMark more than 18 months ago, but unfortunately many car parks are still providing spaces that are far too small and more and more drivers are suffering the consequences as a result.”

He added: “The size of car parking spaces has become a huge problem for both drivers and insurers, and it’s a problem that the parking industry can no longer afford to ignore. Our proposal is to introduce the SizeMark standard, where all car parks that meet this minimum size are awarded an instantly recognizable SizeMark badge to help drivers avoid the stress of trying to park their vehicle in unsuitable spaces and minimise the damage to their cherished cars.”