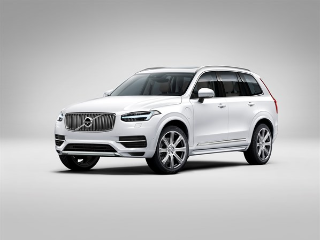 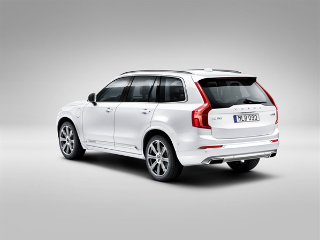 Available to order now, the new XC90 T8 Twin Engine is the only full-size seven-seat plug-in hybrid SUV. It uses a drivetrain similar in concept to the V60 Plug-in Hybrid, with Volvo’s new T6 turbocharged and supercharged four-cylinder Drive-E petrol engine powering the front wheels and an electric motor at the rear axle. This offers four-wheel drive traction and a combined 407bhp, reaching 62mph from rest in just 5.6 seconds.

As well as high performance, the XC90 T8 Twin Engine also offers incredible economy figures with CO2 emissions of 49g/km and a combined fuel economy figure of 134.5mpg. Fully charged, it can travel up to 26 miles on electricity.

The car benefits from a range of financial advantages because of its low emissions. This includes a 100% first year allowance, so the entire cost of purchase can be written off in the first year of ownership. And your company would also benefit from up to £11,470 corporation tax relief*.

Company car drivers can benefit from an incredibly low Benefit-in-Kind (BIK) rate of just 7% for the 2016/17 tax year, while employers' Class 1A National Insurance Contributions (NIC) are kept to a minimum as a result of its ultra-low CO2.

In Momentum trim, the XC90 T8 Twin Engine is also the only car in its class to qualify for a contribution of £2,500 towards the purchase price from the new OLEV Plug-in Car Grant.

With a platform designed for electric drivetrains, the XC90 T8 Twin Engine retains all the practicality and versatility you’d expect from Volvo’s flagship SUV – including up to 397 litres of luggage space with all the seats in place, or 775 litres up to the window line with the third row folded. It also brings a wealth of advanced technology features including Apple CarPlay, which is available across the line-up and enables owners to directly connect their iPhone to the standard Sensus Connect information and entertainment system. Sensus Connect also offers access to a range of web apps such as Rdio, Stitcher, TuneIn, LocalSearch and Yelp.

Another ground-breaking feature is the Volvo On Call app. Standard on every XC90, this allows you to remotely lock and unlock the car, check whether the doors and windows are closed, and access the car’s trip computer information. It also provides the location of your XC90 on a map, and allows you to sound the car’s horn and flash its headlights.

Alongside the XC90 T8 Twin Engine for the first time, attendees at the Silverstone Fleet Show, will be able to test other models in the XC90 line-up in the Volvo range including the XC90 D5 AWD version combining 225bhp performance with fuel economy of 49.6mpg and 149km/g CO2 emissions, and D4 in V40, V60 and XC60.

The Volvo Car Business Sales team will also be on hand to answer any queries you have and talk about its Fleet Hub support programme for businesses.

* Based on a purchase price of £57,350, after deduction of Government plug-in car grant, and a corporation tax rate of 20%.