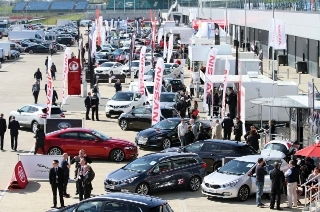 The Show, which is being sponsored by Barclaycard Fuel+ in association with TMC, has already chalked up record numbers of visitors pre-registering to attend the event, a highest ever number of motor manufacturers, more vehicles for test driving and more exhibitors than ever before.

Now Show organisers have revealed that a record number of fleet service companies have signed up to attend the event, which is being held over three halls of the state-of-art Silverstone Wing and three circuits of the world-famous Grand Prix track.

“This year’s Show really does cover the whole scope and range of the fleet market and provides our visitors with a wealth of fleet service providers to meet, investigate and find out more about,” said Jerry Ramsdale, Show director and publisher of Fleet World.

“The Silverstone Wing will again be the venue for the fleet exhibition which now boasts a larger and more diverse array of exhibitors than ever before. This area will also provide our Show visitors with the chance to hold face-to-face meetings, to network and to socially interact with exhibitors and other visitors alike,” he added.

The number of exhibitors this year is up by 52% over last year’s Show, which itself set new records for the number of visitors, exhibitors and test-drives.

“This year’s Show really does offer something for everyone with test driving, fleet seminars, the exhibition plus business networking. We believe it fully justifies a day out of the office for fleet decision-makers in a not-to-be missed opportunity,” added Jerry Ramsdale.

This year’s Show has attracted a record 24 vehicle manufacturers, including several who have never participated before, all providing the opportunity to evaluate the very latest conventionally powered vehicles, alongside pure electric and hybrid models.

Three circuits of the world-famous Silverstone Grand Prix venue will be available for vehicle evaluations, plus off-road driving on the challenging 4×4 course.

Another highlight is likely to be The ‘Stop the Crash’ driver experience being demonstrated by the insurance industry-backed Thatcham Research Centre, alongside Bosch and Driving For Better Business. It will focus on the very latest Autonomous Emergency Braking (AEB) systems, one of the most important primary safety technologies of recent years.

Meanwhile, ALD Automotive, in conjunction with Toyota GB, will again be holding the finals of its Fleet Driver of the Year competition at the Fleet Show when contestants will battle it out for the coveted title.

The Show sold out its previous footprint several months ago, but the organisers have added a limited amount of extra space in Hall 3, a small amount of which is still available, although would-be exhibitors will need to move fast to take advantage of the last few remaining places.

Jerry Ramsdale added: “Anyone who still would like to exhibit needs to get in touch as soon as possible as there is a limited amount of space still available. Demand has been overwhelming, records are being broken in all areas of the event and all looks set fair for another outstanding event.”