More than 50% of cars and vans exceeded the speed limit in towns and on motorways in 2020, as drivers took advantage of the emptier roads in the pandemic. 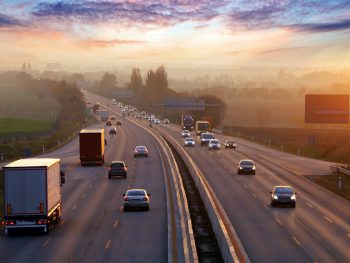 The newly released data from the Department for Transport shows that 56% of cars exceeded the speed limit on 30mph roads along with 53% on motorways and 12% on national speed limit single carriageway roads.

This compares to 54%, 50% and 9% respectively for 2019, prior to the pandemic and underscores the effect of the emptier roads. Previously, vehicle speed compliance has remained broadly stable from 2011 to 2019.

Road safety charity IAM RoadSmart said the statistics painted a worrying picture but added that the increases were not as marked as might have been expected; especially as research published last month revealed that road traffic plummeted to 1960s levels in the first lockdown.

Neil Greig, director of policy & research, commented: “There is some positive news here that many drivers can still be influenced and help us all ‘build back safer’. ”

But he warned: “Getting back on track will require greater investment in roads policing but for now the goal of making speeding as anti-social as drink driving looks far from being achieved.”

Greig continued: “Due to Covid-19 and the national lockdown in Great Britain over four months of restrictions resulted in more free flowing traffic conditions in 2020. While restrictions have continued in 2021 with Freedom Day around the corner all vehicles will need to adjust to increased ‘normal’ traffic levels and regulate their speed accordingly to improve road safety and avoid fines.”

The RAC also said the figures were worrying.

RAC road safety spokesman Simon Williams said: “It’s clear that some drivers dangerously took advantage of quieter roads to drive far faster than they would do in normal times. What’s particularly concerning were the levels of non-compliance on 20 and 30mph roads, many of which are in residential areas and close to schools.

“If traffic volumes don’t return to pre-pandemic levels, it would be terrible if the lockdown legacy was an increase in the number of drivers who consistently speed.”

As with IAM RoadSmart, the RAC called for concerted efforts to tackle speeding.

“In short, speed kills and we can only hope that police forces across the country are able to put the resources in place to clamp down on dangerous drivers and help ensure the roads are safe for everyone,” added Williams.