Volkswagen’s first seven-seat Tiguan will go on sale before the summer, badged ‘Allspace’ in European markets. 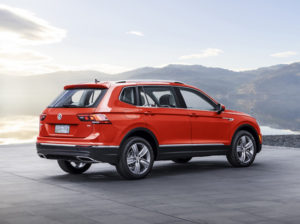 Volkswagen’s first seven-seat Tiguan will go on sale before summer 2017.

Revealed at the Detroit Motor Show this week, the newcomer will put Volkswagen up against a rivals spanning larger Korean SUVs, through to cars like the Skoda Kodiaq, Nissan X-Trail and premium-brand offerings such as the Land Rover Discovery Sport when it arrives in the UK.

It features a longer wheelbase and redesigned rear section, adding room for a folding row of seats in the boot. Specification is said to be enhanced over the five-seat model, though the engine line-up is likely to be almost identical including 2.0-litre TDI options for European markets.